Ukraine’s President Volodymyr Zelenskyi announced this Sunday that the city of Lyman, located in the Donetsk region and the gateway to neighboring Lugansk in the east of the Russian-occupied country and territory, was “completely liberated” as of noon.

“As of 12:30 p.m., Lyman is completely free. Thanks to our military, our soldiers. Glory to Ukraine,” declared the Ukrainian head of state in a video posted to Telegram.

The Ukrainian army intends to turn the capture of Lyman into “opening a road to Donbass,” spokesman for the Armed Forces of the Eastern Group of the Ukrainian Army Serhiy Chereviy announced yesterday.

From Moscow, Kiev soldiers conquered the territory in the Donetsk region

Some of Putin’s troops are believed to be trapped in Lyman, a key logistics hub, after being encircled by Ukraine’s lightning-fast advance. They must either surrender or fight their way out, which would likely cost them large losses.

Last Saturday, Russian Army Spokesman General Igor Konashenkov confirmed the withdrawal of Russian forces from the city. “With the threat of encirclement, the Allied troops were withdrawn from the settlement towards more advantageous lines,” Konashenkov said at a press conference held by the TASS agency. 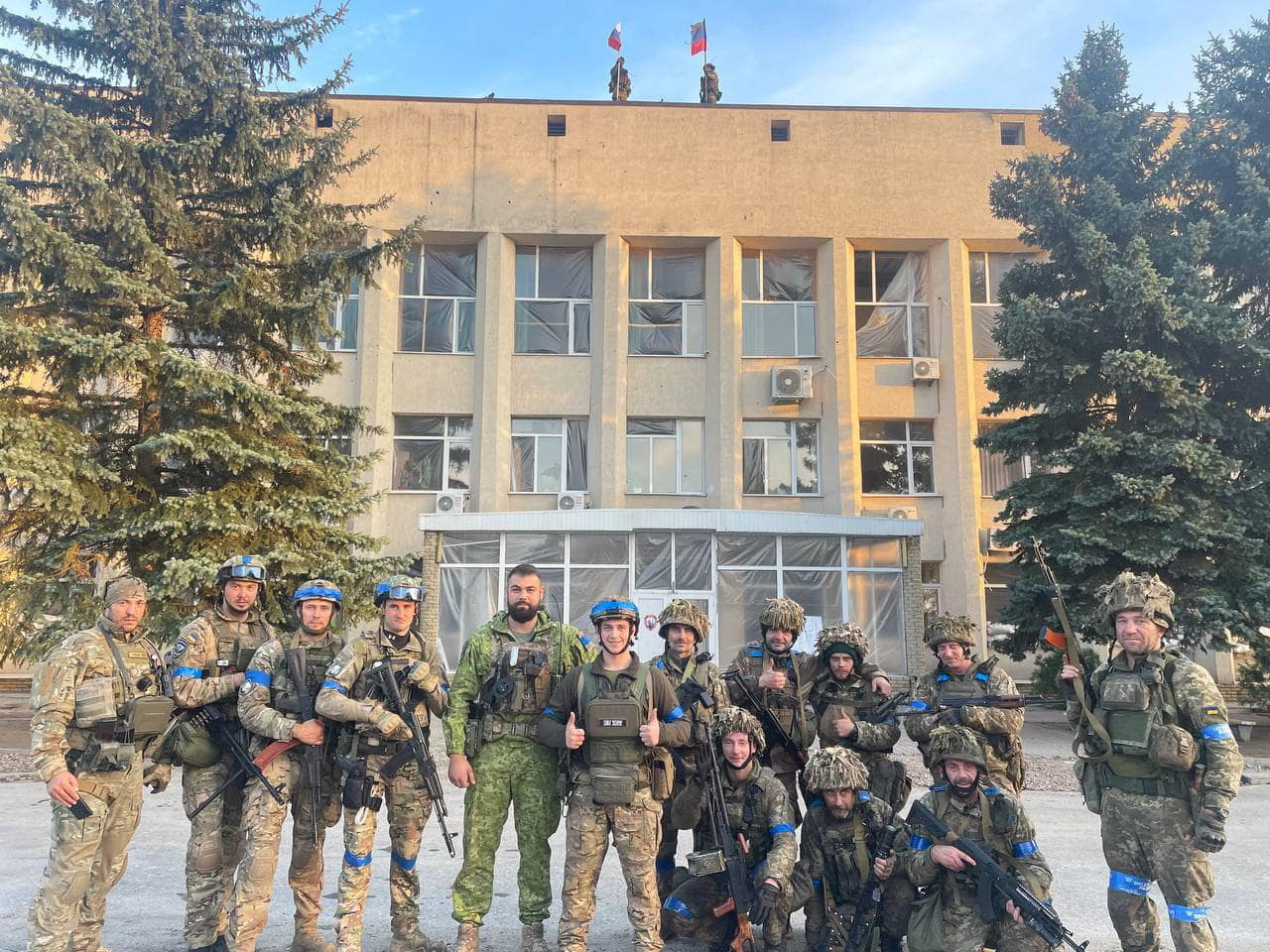 Ukrainian troops pose for a photo in Lyman, Ukraine, in this image released to social media on October 1, 2022.

The city was used by the Russian army as a major transport hub. According to Ukrainian estimates, around 5,000 Russian soldiers remained surrounded there on Saturday, the largest siege of a Russian contingent since the beginning of the war.

Konashenkov has not confirmed exactly how many Russian soldiers remained in Lyman, confining himself to pointing out that the breach of the Ukrainian siege resulted in the deaths of about 200 soldiers on orders from the Kiev government, without giving further details.

The capture of Lyman is an important victory for Kyiv as it is a major railroad junction in the annexed Donetsk region.

In response to the Russian withdrawal from the city, the leader of the Russian Republic of Chechnya, Ramzan Kadyrov, urged Moscow to use “low-power nuclear weapons” and make decisions without considering “the Western American community.”

Following Russia’s official annexation of four Ukrainian regions on Friday, Ukraine announced it would turn to the International Court of Justice (ICJ) and “urge it to deal with this case as soon as possible.”

Ukrainian President Volodymyr Zelenskyy also indicated that he would “sign Ukraine’s candidacy for accelerated NATO membership,” a decision supported by the United States and Canada.

“We strongly support NATO accession for countries that want to join and can contribute their capabilities,” said US Secretary of State Antony Blinken.

On Friday evening, Russian President Vladimir Putin ended a day of celebrations following the annexation of four Ukrainian regions: the separatist regions of Donetsk and Lugansk, and the Russian-held regions (Saporiyia and Kherson).

“Victory will be ours!” the President shouted to the applause of thousands of supporters who had gathered in Moscow’s Red Square, waving Russian flags.

In New York, the UN Security Council considered a resolution condemning the “pseudo-annexations”, which was immediately blocked by a Russian veto.

President Joe Biden reiterated that the United States and its allies “will not be intimidated” by Putin and warned that NATO will defend “every inch” of its territory.

However, the head of European diplomacy, Josep Borrell, warned that this territorial liability would make an end to the war “virtually” impossible.

The Pope addressed Putin for the first time since the start of the invasion of Ukraine: “Stop the spiral of violence and death”
Chechen leader Ramzan Kadyrov urged Putin to use nuclear weapons in Ukraine in response to Lyman’s defeat

Sports Writing, 18 Norway’s Tobias Foss, new CRI World Champion after the big surprise in Wollongong, happily assured after the race that he will honor the rainbow jersey “as best he can”. “It’s like a dream. I still can’t believe it. I thought about finishing in the top ten or five but I didn’t expect… Students at the Pedagogical and Technological University of Colombia in Tunja (Boyacá) evicted violent hooded men during a protest. Photo: Screenshot A notable event occurred Wednesday during a protest at the Pedagogical and Technical University of Colombia (UPTC), which is based in the capital, Boyacá Some of his students beat some hooded who apparently wanted… Citizens of Michoacán have shared videos of experiencing the 7.7 magnitude earthquake. History repeated itself: at 13:05 in the past 09/19Mexico registered a magnitude 7.7 earthquake on the Richter scale hitting the coast coalmanin Michoacan and left chaos in several other entities – including the Republic capital. With that, the country would register a movement… As a sign of protest, women in Iran set fire to their veils in the streets Protests over the death of Mahsa Amin in Iran chained their fifth day this Wednesday with no sign of losing steam and already totaled eight deadwhile the authorities refer to the “foreign enemy”. The protests began tentatively on Friday… The residents of Rincón de Romos spent minutes of terror due to an intense confrontation between assassins who attacked elements of the Aguascalientes Investigative Police, the preliminary result of which injured three agents. Sources consulted by Infobae Mexico They confirmed that as a result of these actions, one of the suspected attackers was arrested and… Antoine Griezmann missed a goal in the Nations League in France against Austria. Anton Griezmann almost scored the 1-0 for France in view of Austria for the 5th matchday of the group phase of the League of Nations. The front ‘Gallic’ He was in front of goal but his shot was blocked by the opposing…