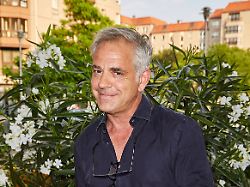 Actor Florian Fitz can be seen in many German television productions. He also does his own stunts: a handstand rollover nearly ended in death for the 54-year-old last year.

Florian Fitz was apparently lucky in disguise: the actor broke his neck in 2021, the 54-year-old now says in a new interview. The whole thing must have happened in Berlin about a year ago. But he suffered no permanent damage.

“When I wanted to do a handstand rollover, I hit my head,” he tells Bild am Sonntag. After that he had neck pain, but no other problems and he “hardly noticed” his broken neck. Several months later, it was found that he had “a partial fracture at C5 and C6”.

Of course Fitz was concerned, but he managed without surgery. His neck was “reset” with “conservative therapy”. “And after a year, the break healed.” He has “no permanent damage” and he can do his stunts himself.

Fitz has been in front of the camera since the 1980s and is best known for numerous TV productions. He played with the “Rosenheim Cops” or in various “SOKO” offshoots, among others. Fitz is currently known as Dr. See Alexander von Arnstett in “Betty’s Diagnosis”.

(This article was first published on Sunday, September 4, 2022.) Muse set the apocalypse to music A solid fireworks for the end of the world By Kai Butterweck 26/08/2022, 3:30 PM Vibrant synths, rock-solid guitars and melodies for the masses: Muse provides the right soundtrack for the worldwide walk to the abyss with their ninth studio album “Will Of The People”. Muse has been one… “Dying for illusory ends” Lindenberg in solidarity with the Russian pop diva 9/21/2022, 10:30 AM (updated) Russian pop icon Alla Pugacheva has long held back with loud criticism of the war. Over the weekend, however, she posts an Instagram post in which she no longer hides her attitude. Longtime rocker Udo Lindenberg jumps on the… No private jets allowed Guests of state fly to the Queen’s funeral line 13/09/2022, 12:23 PM (updated) At the funeral of Queen Elizabeth II in London there is a state of emergency, even a real mobility problem. According to a US report, even state guests should avoid traveling by helicopter or private jet. In London…