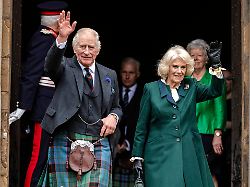 tradition and modernity
King Charles III to be crowned in London on May 6.

London is planning the next big royal event – and Britain can celebrate for a week in May. The Royal Palace has now set the date for Charles III’s coronation ceremony. created. The ESC final will be held in the UK just a week later.

The British King Charles III has about seven months left. wait – then he is crowned with his wife Camilla in London. The ceremony will take place on May 6, 2023 at Westminster Abbey in London. It is headed by the Archbishop of Canterbury. “The coronation will reflect the monarch’s role today and look to the future, while rooting in ancient traditions and splendor,” the palace said. His queen, Camilla, will also be crowned alongside 73-year-old Charles, it was said.

The ceremony falls on the fourth birthday of Charles’ grandson Archie, the eldest son of Prince Harry and Duchess Meghan. Charles has been King of Great Britain since the death of his mother Queen Elizabeth II on September 8. During her lifetime, the Queen had expressed a wish that Charles’ wife Camilla would one day become Queen.

Westminster Abbey has been the site of British coronations for 900 years. Since William the Conqueror in 1066, the Archbishop of Canterbury, head of the Anglican Church, has always conducted the service.

It is not unusual that Charles is only crowned eight months after taking office. “The coronation of the new sovereign traditionally takes place a few months after his accession to the throne and follows a period of state and royal mourning,” the palace said. For example, Queen Elizabeth II has been King George VI since her father’s death. Queen on February 6, 1952. Her coronation, however, did not take place until June 2, 1953. Preparing for the ceremony takes a lot of time, he said. The king is likely to officially set the date with his signature later this year.

Day off debate about

The coronation is both a service and an occasion for celebration and pageantry, it said. “The character of the ceremony has had a similar structure for more than 1,000 years and next year’s coronation will feature the same core elements, but also reflect the spirit of our times.”

Several media outlets had previously reported that Charles wanted a much smaller coronation than his mother did 70 years ago. As for the Queen’s funeral in September, about 2,000 guests will be invited, as the “Daily Mail” tabloid reported. In 1953, 8,000 participants attended the ceremony.

As May 6, 2023 is a Saturday, the date could also put an end to debate as to whether Coronation Day will be a one-time non-working holiday for Britons. Corresponding demands had already been made, and Minister of Economic Affairs Jacob Rees-Mogg had also spoken out in favor of this. The British recently got an extra day off on the occasion of the Queen’s state funeral on September 19. It is rather unusual for the coronation to take place on a weekend. The queen was crowned on Tuesday. The contents in the “archives” were created and posted by the previous owners of this website. We are not responsible for any misleading or incorrect content that is posted here. In Milan during Fashion Week Leni Klum holding hands 9/22/2022 1:32 am It works for Leni Klum. Not only in terms of catwalk career, but… The contents in the “archives” were created and posted by the previous owners of this website. We are not responsible for any misleading or incorrect content that is posted here. As the new Prince of Wales William wants to learn Welsh 28/09/2022, 4:46 PM Charles has been the Prince of Wales for about 64 years…. The contents in the “archives” were created and posted by the previous owners of this website. We are not responsible for any misleading or incorrect content that is posted here. “The Lion’s Den” In the hell of oblivion By Kai Butterweck 10/03/2022 11:26 PM In episode six, uncontrollable emotions come down. In the middle of… The contents in the “archives” were created and posted by the previous owners of this website. We are not responsible for any misleading or incorrect content that is posted here. No, not Hadid “Gigi” should move to the jungle camp 29/09/2022, 11:13 am At best, there’s a risk of confusion with the name: “Gigi”, whose… The contents in the “archives” were created and posted by the previous owners of this website. We are not responsible for any misleading or incorrect content that is posted here. Singer defends himself legally Stalker has been harassing Jack Johnson for years 03 October 2022, 6:30 PM A woman regularly buys VIP tickets to singer…