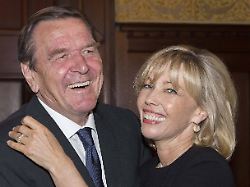 Doris Schröder-Köpf has kept his name. And she doesn’t want to take it off either. So she will probably always be linked to former Chancellor Gerhard Schröder, whose fourth wife she was. Now she’s not only chatting about her private relationship with him, she’s also defending him from political criticism.

Doris Schröder-Köpf was the fourth wife of Gerhard Schröder. But with more than 20 years by his side, she had the longest relationship to date with the now 78-year-old former chancellor.

In a conversation with the magazine “Bunte”, the 59-year-old talks about her current relationship with her ex-husband. The Lower Saxon state politician of the SPD also makes cautious political statements about him. First and foremost, Doris Schröder-Köpf defends the former Chancellor, referring to his merits and legacy.

Gerhard Schröder has done “a lot of good” for Germany in the past, explains the politician, who was originally from Upper Bavaria. Notably, this includes his “No to the Iraq War”, which “avoided damage to Germany”. Doris Schröder-Köpf believes that her ex-husband is currently “being viewed too one-sided”.

“Not Free From Tension”

Privately, she would have contact with Gerhard Schröder ‘because of the children’, she explains. Their relationship is “of course (…) not tension free”. But she has no intention of scrapping the Schröder name in the future. “I have had Schröder as a family name for a quarter of a century and it will remain so. It is now my name. Period,” says Schröder-Köpf.

At the beginning of the year, she broke up with Boris Pistorius, the interior minister of Lower Saxony, with whom Schröder-Köpf last had a relationship. When asked why, in the “Bunte” interview, she refers to major open-heart surgery she had to undergo two years ago.

“Since the operation, I have a slightly different view of my life. If you see your own finiteness in this way, you may have a stronger need for clarity,” says Schröder-Köpf. Despite the divorce, she remains “on friendly terms” with Pistorius.

“I am very grateful”

At 59, she has reached an age where she “doesn’t want to lose any more time,” continues Schröder-Köpf. Looking back, she says, “My life, whenever it ends, has been lush. I am very grateful.”

The former journalist has been a member of the Lower Saxony state parliament since 2013. On October 9, she will be back in front of the SPD.

Doris Schröder-Köpf was married to Gerhard Schröder from 1997 to 2018. However, the divorce took place in 2016. During this marriage, Gerhard Schröder’s chancellorship also fell from 1998 to 2005. Doris Schröder-Köpf has a daughter from a previous relationship. In 2004 and 2006, she and the current former chancellor adopted two children from Russia. Western classics are over Why the ARD “Winnetou” no longer appears 26-08-2022, 10:31 am In the midst of the debate as to whether “Winnetou’s” stories are still relevant today, news breaks that ARD will no longer be broadcasting the Karl May classic. But that could also have to do with licensing issues. Tens of millions… The couple comes to visit Duesseldorf is waiting for Harry and Meghan 09/06/2022, 10:48 am Officially, Prince Harry and Duchess Meghan no longer represent the British Royal Family. But when they come to Germany, it will of course remain a special event. Just like now they are visiting Düsseldorf. Prince Harry and his wife Meghan… The heating may not be on yet, because who wants to pay a huge energy bill? Then money for books is tight and that would be a shame. So we settle down with hot tea and a woolen blanket and read, for example, a graphic novel or an escape story. A cult DJ as a… “Dating Agency WWM” Jauch is looking for a man for a charming headhunter By Nina Jerzy 09/12/2022, 10:15 PM The headhunter has been divorced three times, but wants a man again. “There are now a few million watching. There will probably be a few,” says Jauch with conviction and quickly opens the “Who wants to… Austrian Felix Kammerer makes his impressive feature film debut in the anti-war film “Nothing New in the West”. In an interview with ntv.de, he reveals how he got the part, when he got chills on set and whether he actually served.t. ntv.de: Mister Kammerer, you are Austrian. In contrast to Germany, conscription has not been… Back on tour after five years Helene Fischer dreams of Las Vegas 25-09-2022 03:57 o’clock Celine Dion had it, Lady Gaga and Mariah Carey had it: her own show in Las Vegas. Once down the show steps of Caesars Palace or the MGM Hotel – that would be something for Helene Fischer too. But she…