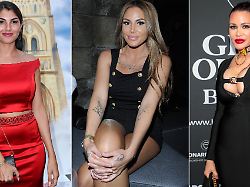 The rumor mill is spinning
Are these three also moving to the jungle camp?

It will take more than four months before the jungle camp in Australia opens its doors again. But the speculation about the possible participants of the 16th season is already shooting up. Now three new names are being discussed.

As for the 16th edition of “I’m a Celebrity – Get Me Out of Here!” be concerned, there are already some facts. It is certain that the show will be back in Australia at the beginning of 2023 after a one-off trip to South Africa. It is also clear that Sonja Zichlow will stick with the format from the start as a moderator. And that Jan Köppen joins as her counterpart after Daniel Hartwich voluntarily left the job for family reasons.

But much more that is currently being whispered about the successful RTL show (also available on RTL+) is just speculation. Especially of course when it comes to potential participants in the coming year.

Again, the “Bild” newspaper has released three more names that it seems certain we will hear again in the jungle camp in 2023. On the one hand, there is Yeliz Koc. The 28-year-old had become known for her participation in “Der Bachelor”, where in 2018 she unsuccessfully competed for the affection of Rosenkavalier Daniel Völz. After that, other reality TV shows such as “Bachelor in Paradise”, “The Summer House of the Stars” or most recently “Battle of the Reality Stars” were on their schedule.

However, her relationship with the actor’s son, Jimi Blue Ochsenknecht, mostly made headlines. In the end, she even had a child, although the couple broke up before the birth. Is Koc really ready for the jungle?

Or is it Djamila Rowe? She had at least shown an interest in it in the past, in “I’m a Celebrity – Get Me Out of Here!” participate. In the “jungle show” produced in Cologne in 2021, she fought for a real camp ticket in South Africa, but had to admit the future king of the jungle Filip Pavlović. According to the newspaper “Bild” it should now be before 2023 – without any competition for the ticket to the camp.

How do you know Djamila Rowe again? Well, maybe from the “Adam sucht Eva” nude show, which she participated in in 2017. Or from much earlier: “Big Brother” 2006 for example. Or “Die Alm” in 2004. Or because of the story that started Rowe’s dubious public career: the trumped-up affair with then-Swiss Ambassador Thomas Borer in 2002, which earned her the nickname “Embassy Slut”.

Besides Koc and Rowe, Schnodderschnauze Lisha is the third member of the current jungle camp speculation. Those who don’t know her from YouTube may have already met her and her partner Lou Savage at the “Summer House of the Stars”, which the two made unsafe in 2020. The couple was part of the scandal season in which the candidate Eva Benetatou was subjected to harassment by ex-“Bachelor” Andrej Mangold and his supporters in the house.

That could close a circle. Because Mangold is also hotly traded as a jungle camp candidate for about a week. Just like influencer Twenty4tim, which has not yet been officially confirmed. It is not even certain that Lucas Cordalis will participate, who had to pass in the short term in 2022 due to a corona infection and is therefore already regarded by many as permanent. Cordalis has formulated his wish to make up for the missed show participation. RTL has not yet made the final decision on this. Pale and battered Alfons Schuhbeck appears in court for the first time 10/05/2022, 13:35 hrs The allegations against Alfons Schuhbeck weigh heavily: he is said to have smuggled more than 2.3 million euros past the tax authorities. That is why the star chef now has to answer to the court. If convicted, he could even… Glad that’s settled The Queen’s dogs have a new home 13-09-2022, 12:35 PM The death of Queen Elizabeth II raises many questions that must now be answered. Including this one: what will become of your two corgis now? But don’t worry, the cow – or rather the dogs – are coming off the ice. Muick… One year old at birth? Doctor fails at Jauch’s birthday party By Nina Jerzy 10/04/2022, 11:25 PM Even the children’s party overwhelms the candidates for “Who wants to be a millionaire?”. One after another crashes into the Zocker Special. Does anyone come above 1000 euros? That’s not only Günther Jauch’s question. Fortunately, there is the…