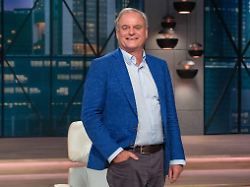 A guest lioness appears in the lion’s den, eager to go home with a deal in her pocket. In the end, however, it is an old resident who only clenches his fists.

There is eager whispering and whispering on the shelves of Germany’s most popular crafts and inventors stage. The reason: a guest lioness with self-confident ambitions sits among the well-deserved format investors. Diana zur Löwen fits perfectly into “The Lion’s Den” not only because of her unusual last name, but also because of her entrepreneurial visions and ideas.

As a successful influencer, the 27-year-old content creator is living the dream of an entire generation. In the lion’s den she wants to pass on her experience and help suitable start-ups with advice, action and investment capital. However, it quickly becomes clear that a lucrative and forward-looking partnership with a brand new team of founders is not a matter of vote. Product, founder, perspective: everything has to fit.

Unfortunately, nothing really fits the concept of the influencer on this day. Neither a “digital memory assistant” intended to capture life’s most beautiful memories (“Meminto Stories”), nor a panacea to increase blood flow to the pelvic floor (“Gatepress”) that has not yet been approved as a medical device, ensure ensure that the guest lioness jumps out of her chair enthusiastically. A cleverly conceived financial platform for young people, including a groundbreaking vision for the future (“In 2026 we expect seven million users and a turnover of 180 million euros”), arouses no interest (“GetMoBie”).

Somehow the dealworm is in it this time, as the other lions are noticeably reticent as well. Only Georg Kofler is in the mood to bid. Although the Tyrolean, who never shuns a pithy saying, has no interest in memory books, devices to improve pelvic floor circulation and an educational platform for finance. But in other presentations, the lion shows impressed, enthusiastic and willing to cooperate with both thumbs up.

“If we didn’t have Corona…”

First of all, Georg Kofler enjoys the pitch of housewife and plant lover Sabine Wirz-Springe, who comes from Bergisch Gladbach. The 58-year-old blonde with the infectious smile promises “fast yields and great growth” with her “Gold Leaf” fertilizer blankets. Unlike all the other lions present, Georg Kofler quickly became enthusiastic about the product and the founder: “I believe that life can be made easier for yourself”, the investor grins. Shortly after, Georg Kofler spreads his arms: “You know, I’m just doing it with you!” said the lion. The sympathetic founder doesn’t have to think twice: “If we didn’t have Corona, I’d kiss her now, Mr. Kofler!”

The joy in the lion’s den is great. The deal ban seems to have finally been broken, thanks to new pack leader Georg Kofler. The social media expert with the lively tongue also wants a second helping. This is where the passionate “cake magician” Elina Hoffmann from Mörfelden Walldorf comes in handy. The hobby baker doesn’t just hit the bull’s eye with Georg Kofler with the “themed cake do-it-yourself kit” that even a layman can conjure up beautiful fondant cakes at home in no time at all.

Georg Kofler takes on the role of pack leader

The two lionesses Dagmar Wöhrl and Judith Williams are also interested in a sweet collaboration. Ultimately, ten percent of the company’s stock determines which investor will go on board with “Clever Cakes” in the future. Because Georg Kofler demands ten percent less than his two format colleagues, the founder decides to collaborate with the social media expert. This time he proves that in the absence of the previous deal king Ralf Dümmel he is perfectly capable of taking over his role as pack leader without any problems. The absent lions in Hamburg, meanwhile, will be happy. Ex-Beatle was cheeky Queen giggled at Paul McCartney’s joke 09/10/2022 12:33 PM Paul McCartney is considered a chauvinist, but no one would think he would risk a cheeky lip on the Queen of England. But in 2018 he does. However, Queen Elizabeth doesn’t blame it and giggles rather unmajestic. Ex-Beatle Paul McCartney recalled his encounters… Strengthening the EU relationship Will Charles go to Paris first? 9/21/2022, 6:49 PM It would be rather unusual: his first trip abroad could be Charles III. should not lead to a Commonwealth country, but to France – as a sign of solidarity with Europe. In the meantime, the new monarch probably wants to make cutbacks… By bus to the Queen’s funeral Emperors, kings and heads of state are not amused 16-09-2022, 14:01 hrs London is expected to burst at the seams on Monday at the Queen’s state funeral. Many politicians and crowned heads from other countries have also announced their arrival. However, not everyone thinks they should take the bus… “He can call me boss” Sophia Thomalla does it with Lukas Podolski 10/18/2022, 6:33 PM Sophia Thomalla is not only an eye-catcher, but also very smart and businesslike. So she knows exactly how best to advertise a company in which she has invested herself: in sexy outfits. She is now supported by none other than… “This England” about the Corona crisis Boris Johnson film postponed due to Queen’s death 9/10/2022 1:24 am The death of Queen Elizabeth II and the time of royal mourning have consequences for the film industry itself. As is now known, TV channel Sky has postponed the start of a film about Boris Johnson’s work in…