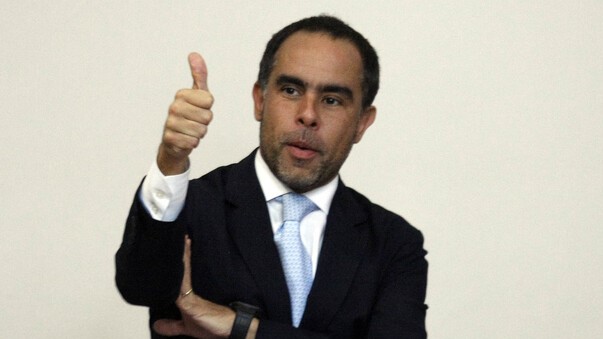 Colombian Ambassador to Venezuela Armando Benedetti poked fun at the Venezuelan opposition who would blame THE infamous case of corruption at the Monómeros company. Photo: Colprensa

This Wednesday, September 21, the Ambassador of Colombia in Venezuela, Armando BenedettiShe allegedly mocked opposition figures in the neighboring country be held responsible for the embezzlement of the company MonómerosSubsidiary of the Venezuelan oil company PDVSA in Colombia.

“Venezuela’s opposition is very funny. Now those of Guaidó say that it was Leopoldos who plundered Monómeros and they wonder why former President Iván Duque didn’t investigate,” the former senator said on his Twitter account after the alleged corruption scandal at the fertilizer company.

This statement by the Colombian ambassador comes a day after the regime of Nicholas Maduro regained control of the petrochemical company, which was in the hands of opponent Juan Guidó for about three and a half yearsPeriod in which it was intervened by the Superintendency of Companies in Colombia.

In a statement, the opposition leader indicated that the alleged cases of corruption registered by the supersociedades should be “investigated and punished”, noting that it was a proposal he shared with Juan Guaidó; However, he made it clear that they could go unpunished in the hands of the Maduro regime.

“After the regulator of Colombian companies ratified their complaints in August 2021, I worked to reach consensus on two fundamental issues: remove those accused of corruption and start restructuring the company. President Juan Guaidó Márquez brought the case before the National Assembly, but failed to secure the necessary majority to advance the proposal,” López said in the letter.

He also pointed out that the perspective of monomers It had been “serious” since early 2019, before the formation of the self-proclaimed “interim government” headed by Juan Guaidó, which had been sanctioned by the Office of Foreign Assets Control (OFAC) for allegedly funding the regime of “oppression”. , torture and human rights violations.

“When President Guaidó’s government took control of the board, it obtained an OFAC license that would allow the company to function properly. But in reality, skepticism towards the company remained, so its operations, for example access to financing, maintained a high level of difficulty and high costs,” López said in the letter, contradicting the alleged finding announced among opposition leaders by Armando Benedetti.

According to the president of Venezuela’s state-owned company Pequiven, Rafael Tellechea, who will run the company, in 2019, when former president Iván Duque ousted Nicolás Maduro and appointed Juan Guaidó as Venezuela’s interim president, sWe devised a plan for Monómeros to “go into debt” and then sell it.

“The company was in for a big tumble. Or strategically, they had a strategy for the company. The strategy was to borrow the company in order not to be able to pay the debt and of course to sell it as Colombian legislation dictates that for a debt held the shares go to the companies where the debt is held. Find an ally they had. Today we are reviewing this information,” Tellechea told the Zona Cero portal.

The President of Pequivesa assured that Duque and Guaidó already had a buyer for Monómeros, but did not name the name.

Ambassador Armando Benedetti acknowledged that restoring relations between Colombia and Venezuela is “tough”.
Juan Guaidó: “There was a systematic plan of human rights violations that directly points to Nicolás Maduro”
Armando Benedetti insists Colombia must buy gas from Venezuela: ‘It would cost a lot less’

Georgina Garcia PerezSpaniard, number 344 in the WTA, surprises with a win 4-6, 7-6 and 6-4 in two hours and fourteen minutes daria snigurUkrainian tennis player, number 110 in the WTA, in the qualifying round of the WTA 500 tournament in Ostrava. With this result, the winner adds new points to her ranking to be… The temporary return of Pedro I’s heart was embroiled in controversy: the situation was complicated by the coincidence of the bicentenary with the first round of presidential elections (Alan Santos / PR). On September 7, 1822, the then Prince Regent Pedro de Bragança proclaimed Brazil’s independence on the banks of the Ipiranga River, severing all… Rubén Moreira is the leader of the PRI in San Lázaro. (Infobae) Ruben Moreira Valdez he is an old sea dog of Mexican politics. In which over 30 years who was active in the public functionheld all sorts of bureaucratic and partisan offices, chiefly in Coahuila, where was governor and head of state his political… Santiago Alarcon, Colombian actor. Photo: Instagram @santiarconu Fifty days after taking the reins of Colombia, President Gustav Petro He is already threatened with the first day of demonstrations against his management. Groups disagreeing with the current government’s policies have met in several cities across the country to express their dissatisfaction with some of the proposed…

The Nicaraguan government deepened its international isolation this week by expelling the EU ambassador, cutting diplomatic ties with the Netherlands and refusing the arrival of the newly appointed ambassador from the United States. According to diplomatic sources, the European Union (EU) ambassador to Nicaragua, Bettina Muscheidt, left Nicaragua this Saturday after being declared non grata…