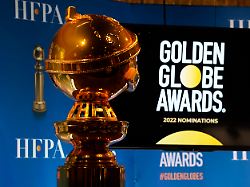 The Golden Globes are the second most important award in the world of cinema, but the glory of the award has faded considerably in recent years as allegations of corruption and racism are causing the award ceremony to lose acceptance dramatically. After an announced reform, there is a new opportunity.

The Hollywood Foreign Press Association (HFPA), which has been massively criticized for allegations of corruption and racism, has announced that the Golden Globes will resume televised in 2023. According to Variety, a deal has been signed with the American broadcaster NBC for a year. Accordingly, the awards ceremony, which will celebrate the 80th anniversary edition next year, will take place on January 10 at the Beverly Hilton hotel in Beverly Hills. The Golden Globes were not broadcast on TV for the first time this year and there was no audience due to the corona pandemic.

The HFPA came under fire after a report in the Los Angeles Times revealed that its membership consisted almost entirely of white journalists. However, according to the “Variety” report, the association has now become much more diverse.

Actress Scarlett Johansson complained in 2021 that she was asked a lot of sexist questions at HFPA press conferences. “That’s exactly why I’ve refused to attend their conferences for years,” Johansson told Variety. In August 2021, the HFPA then announced that it planned to add at least 20 new members, mostly African Americans, in the same year and to double the membership within 18 months. There should also be new guidelines for foreign journalists, for example with regard to invitations to film events. Accepting business gifts is now prohibited. Members are required to take diversity and inclusion courses.

Many in Hollywood view these steps as not far-reaching enough and not binding enough. In addition, they would often go into effect in the fall at the earliest and thus have little effect on the nominations for the upcoming season. The “Time’s Up” anti-discrimination organization and an association of about 100 major PR firms also confirmed similar shutdowns for partnerships with the HFPA such as Amazon and Netflix – both major streaming services had suspended partnerships with the HFPA. “Time’s Up” criticized that the judges are not required to prove that they have seen the nominated films.

Actor Mark Ruffalo, who won a Golden Globe himself in 2021, tweeted after the association’s statement: “It is disappointing to see the HFPA, which has become famous for its involvement with filmmakers and actors and has benefited significantly from them, the Denied changes that are demanded of her.”

The fact that they’ve only agreed to a one-year contract for the time being indicates that acceptance for the major film awards in the US after the Oscars needs to be explored first. December 12, 2022 will tell if the nomination list is different or if it will again cause criticism. Then the contenders for the Globes will be announced. After announcement for 2023 Rihanna is nervous about the Superbowl show 10/06/2022 09:59 o’clock In late September, it was announced that Rihanna would appear at the Super Bowl halftime show next year. Now the 34-year-old singer is commenting on the plans for the first time. Despite her success, she obviously has respect for this special… Lifetime performance award Elton John sings at the White House 20-09-2022, 10:21 PM British pop star Elton John is not only one of the most important musicians of all time, according to Billboard. The 75-year-old may appear on Friday before US President Biden at the White House. He should also be honored for his life’s… “That is ridiculous” Brad Pitt wants to age gracefully 9/22/2022, 9:11 PM Brad Pitt has long been the sex symbol par excellence. But at the age of 58, he is already approaching retirement age. There’s no need to despair, he assures, especially since he’s just opening up a new field: the Hollywood star is launching… Getting married at RTL-Star Nazan Eckes is single again 10/24/22, 10:34 AM (updated) On October 4, Nazan Eckes published a happy photo of her family of four. But marital bliss would have long since failed at this point. When asked, the sister now confirms that the marriage of the popular RTL presenter has ended after… Estate of TV star Betty White Souvenirs from “Golden Girl” bring rain of money 26-09-2022, 08:30 a.m. Betty White will die a few days before her 100th birthday at the end of 2021, but the TV icon will not be forgotten. Wealthy fans get exclusive souvenirs from the “Golden Girls” actress in a big auction….