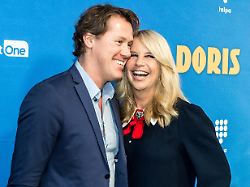 Presenter Linda de Mol has been in a relationship with musician Jeroen Rietbergen for 14 years. In addition, the 51-year-old allegedly molested women as part of his work for the TV show “The Voice of Holland”. De Mol, however, does not want to have noticed.

TV presenter Linda de Mol has responded extensively to the abuse scandal involving her ex-partner Jeroen Rietbergen in the Netherlands. The 58-year-old split from her longtime boyfriend earlier this year. It had previously become known that Rietbergen had abused his power as a bandleader and sexually harassed candidates while working for the TV program “The Voice of Holland”.

In her magazine “Linda”, de Mol now describes the evening of January 12, 2022, when she would have heard of the accusations for the first time. She was just preparing a risotto when an email suddenly changed her life. “I fell into a big, deep, black hole,” writes de Mol.

“That someone you love so much has behaved badly towards young women – that caused me sadness and anger,” the presenter continues. In the days that followed, she felt “numb” and unable to leave her own home.

It will be further investigated

There is controversy in the Netherlands as to whether de Mol was already aware of the allegations in 2020. Two women would have approached her at the time. However, De Mol states in her current statement: “I knew, and I swear to my two children, about nothing on ‘The Voice’.”

After a hiatus, de Mol returned to television only earlier this month. She hosted a new edition of the game show “Miljoenenjacht” (“Million Hunt”). Meanwhile, the prosecutor’s office is continuing the investigation into her 51-year-old ex-partner. It is currently uncertain whether a report will be filed.

“The Voice of Holland” is the Dutch counterpart of the talent show “The Voice of Germany”, which was successful in this country. It went on air in 2010, a year earlier than the German version. Rietbergen has been working for the formula since 2013.

Linda de Mol is a popular presenter in the Netherlands. But she also made a name for herself in Germany, especially as a presenter of the RTL program “Traumhochzeit” in the 1990s. With or without debate? Harry and Meghan are back in the US 9/23/2022, 10:08 AM A journey that would last only a few days turned into almost three weeks. Due to the passing of Prince Harry’s grandmother, Elizabeth II, he and his wife Meghan have extended their stay in the UK. But now they would… “I won the lottery” Barack and Michelle Obama celebrate their 30th wedding anniversary 10/03/2022, 8:30 pm For him it was love at first sight, she shouldn’t have been quite sure: but now former US President Barack Obama and his wife Michelle are celebrating their 10-year bond. The 61-year-old wonders why time hasn’t left a mark… Maria Furtwängler has been exploring her way through Lower Saxony for 20 years. To celebrate the day, viewers can learn a new word: “refugee folklore.” Unfortunately, there’s not much more to get out of the anniversary episode. In ARD jargon, the theme of ‘crime scene’ is the crime novels that should be about more than… When a dream turns into a nightmare Felix Hutt explores the fashion scene 13-10-2022 10:22 am Becoming a model is a dream for many. But only a few in the industry make a career. If you want to stay in the race, you’re often forced to take on every job imaginable – including an escort… registration of the children William travels to Scotland without Kate 09/08/2022, 5:27 PM Queen Elizabeth II’s family rush to Balmoral Castle in Scotland after the dramatic news from the doctors. Duchess Kate, meanwhile, remains in the capital with the children. The descendants have an important appointment there. While Prince William and other family members travel…