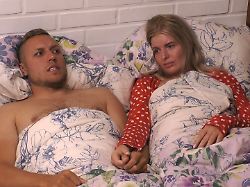 Farmer Patrick shoots himself completely out of control, Cosimo is finally a winner and the Dürrs have lost on the battlefield. The penultimate episode of “Summer House of the Stars” also has a good thing: Patrick’s juice is finally turned off.

“You’re not the strongest, but you’re the toughest woman here,” Farmer Patrick told his partner, and it shouldn’t have been the last time that day. The mood in the summer house is currently changing, partly because Antonia is “stupid in the head, has no bite” and simply “can’t do anything”, and partly because the “Sidekicks” are now rebelling “against the Originals”.

What came first? The chicken or the egg? The fact is, the latecomers are making their right to exist in the house known to the “top dogs” and hey, Farmer Patrick: Can you please stop making constant pejorative comments about women’s bodies? So he babbles about Vanessa, she has no curves, there is nothing real about her and unfortunately his Antonia used to be “fat”, of which she still has “a wide pelvis”, which is certainly also due to her eating habits.

You could also counter the peasant’s disgusting disgrace with a slightly modified statement from Dürr’s “Mindset” and say, “Hopefully you get kicked out for your misogynist statements on the spot!” In particular, the way he publicly exposes, shames and manipulates his partner is hard to bear.

We need a little positivity now. Hurrah! Cosimo and Natalie win the “Exit Challenge” against the Dürrs! This is certainly also due to the ingenious psychological warfare of the Neckar checker, who casually asks Stephen before the match: Do you feel like losing? While the men hold baskets on ropes in the air, the women have to throw small sandbags into the opponent’s basket. While Dürr barks: “Baby please! I can’t breathe anymore!” Cosimo begins to sing and dance.

Stephen lost, of course, only because his basket became heavier than himself. “It’s just physics.” But: “Losing on the battlefield is better than being voted out.”

While “the originals” compete with the “sidekicks” in “tornado drinking”, Antonia stands alone in front of a mountain of dishes. And of course she’s “fucked” because “nobody wanted to help her”! Not a day goes by that she isn’t treated with condescension by her partner. This is also the case with the high altitude challenge: “I’ll hold the bar for you”.

The 22-year-old, who is afraid of heights, overcomes and surpasses himself. She climbs, she cries, she supports Patrick where she can, while, as usual, he says contemptuously, when she can’t put the heart away to play properly: “I put Spider-Man on the wall and she doesn’t even get him to open the bag.”

Shortly after the match, Antonia has a panic attack. Tears roll down her cheek. She is breathing heavily. Her boyfriend ignores the sad state of his ‘sweetheart’ and is again only ‘self-centered’: ‘I have a stomachache from death’. Finally, he replies, “I’d rather fight for two, then I’ll know I’ve done it right.”

“The full-time influencers” are winning the big game. Unfortunately, however, the joy is short-lived, as the focus is once again placed on the poisonous farmer’s verbal blunders. He puts his Antonia back on huge. “I don’t know what happened to you today! You’ve lost the sparkle in your eyes,” he teases her after the second lost match in the final episode before the finale.

When Antonia pulls back and tells him she’s afraid of getting sick, he says: “Maybe in my head! (…) You don’t win a flower pot. (…) I don’t see a bite there.” And again he urges her that something is wrong with her: “It must be your head, honey!”

The other summer house dwellers do not miss how much the farmer always blames his partner for everything. Let’s do it like Cosimo: let’s ignore the manipulator and play “Journey to Eskimo” instead. The contents in the “archives” were created and posted by the previous owners of this website. We are not responsible for any misleading or incorrect content that is posted here. “I was scared like never before” Hansi Flick talks about his wife’s breast cancer 16-09-2022, 10:45 am “There are things that are bigger and more… The contents in the “archives” were created and posted by the previous owners of this website. We are not responsible for any misleading or incorrect content that is posted here. “A Real Angel” Annemarie Eilfeld gives birth to son 09/01/2022 10:23 am Annemarie Eilfeld did not become a “superstar” at the time. Even in the… The contents in the “archives” were created and posted by the previous owners of this website. We are not responsible for any misleading or incorrect content that is posted here. “I did something wrong” Alfons Schuhbeck makes a partial confession 10/12/2022 12:34 PM The trial of Alfons Schuhbeck in Munich takes a surprising turn. The… The contents in the “archives” were created and posted by the previous owners of this website. We are not responsible for any misleading or incorrect content that is posted here. “Your Eternal Legacy” Harry honors the queen – and the father too? 13/09/2022, 12:22 PM (updated) Relations with his grandmother were never very tense. Therefore,… The contents in the “archives” were created and posted by the previous owners of this website. We are not responsible for any misleading or incorrect content that is posted here. Back on tour after five years Helene Fischer dreams of Las Vegas 9/26/2022, 12:47 PM (updated) Celine Dion had it, Lady Gaga and Mariah Carey… The contents in the “archives” were created and posted by the previous owners of this website. We are not responsible for any misleading or incorrect content that is posted here. Farewell to the Queen in London That’s why only Harry and Meghan held hands 09/14/2022, 8:27 PM In a solemn procession, the next of kin…