The popular renovation candidate, Rafael Lopez Aliagabegan on election Sunday at the Sheraton Hotel in central Lima, from where he left to campaign at 7:10 am Rimacto attend his breakfast of choice. On his departure, he made brief statements to the press, saying he had his own parallel data center.

When asked whether he would accept the election results, whether they were favorable to him or not, Lopez Aliaga He replied: “We have a parallel data center and will contact you at the right time at 5 p.m..”

“The elections are today, we will work for it,” he added.

The candidate mentioned that his election breakfast will be held in the district Rimac, in a popular dining room. “I want to spend it with the people who have the least, who are my heroines. All mothers of the frosted glass, the soup kitchen, and the common pot,” he said.

“This is a day of democracy. Luckily we still have democracy in Peru. In democracy we must live forever and be a world power,” he added.

Lopez Aliaga He mentioned that after breakfast in Rímac he would go to his voting center in Miraflores. 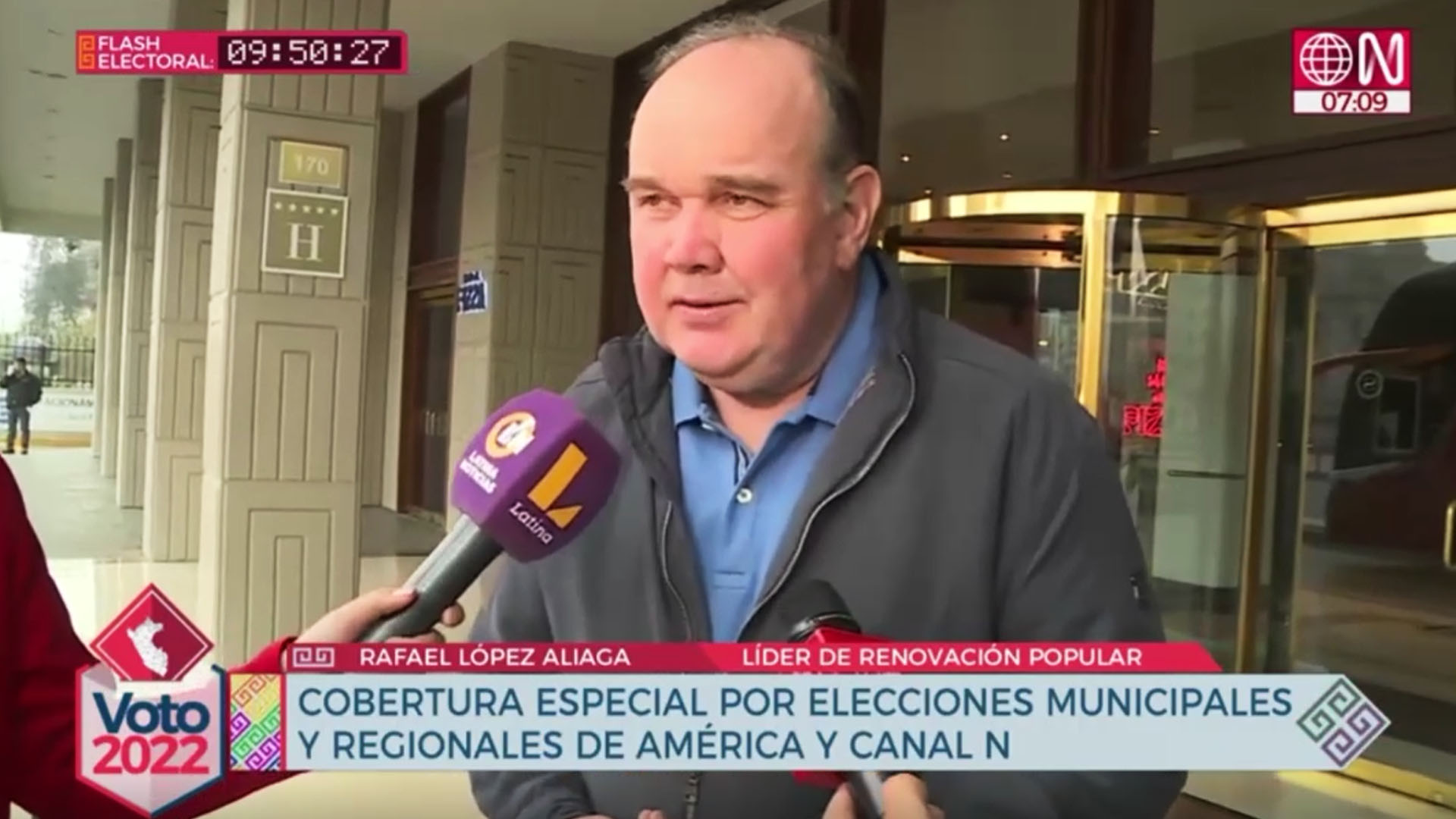 Despite what López Aliaga said on Saturday, the head of the National Office for Electoral Processes (ONPE), Piero Corvettor announced that this Sunday between 22:00 and 23:00 the first results of the regional and local elections that will take place across the country.

“We’re hoping to have results that show the public interesting percentages between 10pm and 11pm, even though it’s closer to 10pm,” he said PTR.

He also indicated that they hope to be able to close the tables by 5:15 p.m. at the latest, because some of the population who are still in the polling stations have to end the election campaign.

“Then we will proceed to count the votes, always in the presence of representatives of the political organizations that I invite to be present at each of our more than 84,000 voting tables and they must make a copy of the record of the vote count and they can compare this record with the Compare information we’ve posted,” he said.

It should be noted that during the week prosecutors issued warnings which behaviors constitute criminal offenses violating liberty and the right to vote and could result in a prison sentence.

The institution reported that disrupting or obstructing the flow of the electoral process through violence or threats can be punished with imprisonment ranging from 3 to 10 years.

In addition, preventing a voter from exercising their right to vote, forcing them to vote in a certain direction, or using an advantage to make them choose not to vote or vote in a different direction, can be punished with a sentence of 1 to 4 years to choose.

Election fraud, multiple votes in the same election, or voting without authorization are also criminal offenses and carry a penalty of 1 to 4 years.

Meanwhile, falsifying or destroying voting records, DNI or ballot papers, or hiding, keeping or making disappear such documents in order to prevent the election or falsify its result is also punishable by imprisonment ranging from 2 to 8 years.

Similarly, removing, destroying or replacing ballot boxes used in an election prior to the count in order to influence the outcome or to favor or harm a candidate or political organization is punishable by imprisonment for between 2 and 8 years.

Finally, altering the result of an election, or the impossibility of counting to influence the result, or favoring or harming a candidate or a political organization, is punishable by imprisonment between 2 and 8 years.

Specifically for the New York Times Infobae. ROME – Giorgia Meloni, the far-right leader who is likely to become Italy’s next prime minister, used to disguise herself as a hobbit. A youth activist in the post-fascist Italian social movement, she and her group of militants, nicknamed Frodo and the Hobbit, worshiped The Lord of the… house building Recently the Housing Minister Catalina Velasconoticed that the odds for “Mi casa Ya” (a subsidy the country regulates for Colombians to access the Purchase of social housing (VIS) from $63.5 million to $150 million) For the validity of this year (2022) it has already reached its limit. But this week, the same head… Pedro Avilés Pérez, The Lion of the Sierra (Infobae) On the night of September 15, 1978, in the middle of the national holiday for the mexico independence, Federal Criminal Police officers were at a checkpoint on the local road leading to the town of “El Tepuche,” about 10 kilometers from Culiacan, the capital of Sinaloa…. The PRO speakers meet this Tuesday (Roberto Almeida) The Buenos Aires government’s crackdown on the Kirchnerist militants who have come to support Cristina Kirchner in recent days added a new chapter Intern from Together for change. Amidst the criticism Patricia Bullrich a Horacio Rodriguez Larreta and the allegations crossed paths “functional for Kirchnerism”the PRO speakers… Video game Cyberpunk 2077 on Steam. (Photo: Razer) talk about it Cyberpunk 2077 is to talk about one of the most talked about releases in recent years. The game that finally came out was a far cry from the expectations of the players and the promises made by those responsible. Nevertheless, the last few weeks…