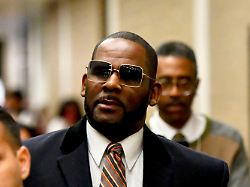 There have been rumors for decades that R. Kelly would abuse underage girls. The R&B superstar can avoid criminal consequences for a long time. But eventually the past catches up with him. He now faces another long prison term.

Former pop star R. Kelly has been convicted of sex crimes again. A jury in Chicago on Wednesday found the 55-year-old guilty of sex with a minor and producing child pornography, US media reported unanimously on Wednesday.

Just a few weeks ago, the New York “I believe I can fly” singer was sentenced to 30 years in prison for abusing minors. In a second Chicago trial, he was charged with 13 counts, including multiple counts of producing child pornography and inciting the sexual activity of minors. According to the New York Times, the 12 jurors acquitted him on seven counts, including charges of obstruction of justice.

The verdict will be announced at a later date, Kelly still faces several decades in prison. Kelly had always denied the allegations. He has been in prison since the summer of 2019. Two other accused ex-employees of Kelly’s were acquitted.

Since #MeToo, the pressure to clarify has increased

In Chicago, there was also a 2002 video that has been known for years in which Kelly allegedly abused a 14-year-old girl and urinated on her. In this case, the musician was already acquitted by a jury in 2008. Prosecutors accused him of pressuring the victim not to testify at the trial. In the retrial, the now adult woman had confirmed that she was the person in the video.

The lawsuit — after cases like those of film producer Harvey Weinstein and comedian Bill Cosby — is another much-noted legal work-up in the MeToo era. The first accusations against the musician, born Robert Sylvester Kelly in Chicago in 1967, were leveled about 25 years ago. But the music colossus seemed untouchable on his pop throne and remained at large for a long time. With over 50 million albums sold, several Grammys and other accolades, he was one of the most successful musicians of the late 20th century. But at the latest when the sensational documentary “Surviving R. Kelly” summed up the allegations in 2019, the singer grew increasingly lonely. Stars distanced themselves from him, as did radio stations, streaming services, and then his music label RCA, which is owned by Sony Music.

(This article was first published on Thursday, September 15, 2022.) ‘Baby girl Pelphrey is coming in 2023’ Kaley Cuoco is pregnant 10/12/2022 2:44 am It wasn’t until September that American actress Kaley Cuoco and her boyfriend Tom Pelphrey first walked the red carpet together, and now both are announcing the 36-year-old’s pregnancy on Instagram. Fans can also take a look inside her baby belly. American… Also on holiday ZDF shows “Winnetou” 28-09-2022, 09:57 o’clock Is “Winnetou” still contemporary? This debate has become heated recently. An alleged boycott of the Karl May films by the public broadcasters also surfaced. But look at this: “Winnetou and the Half-Blood Apanatschi” is still on the program of ZDF, and on the German Day of… “Pure Abuse” Britney Spears violently attacks her family 8/29/2022, 8:06 PM The time when she was under her father’s tutelage is over for Britney Spears. But the time of reckoning is apparently far from over for them. Once again she deploys the heavy artillery against her family. Her mother won’t let that sit on her…. Katharina Gerhardt is actually an actress herself – with small roles, for example in “Tatort” or at GZSZ. She is also known as the ex of comedian and “Hausmeister Krause” actor Tom Gerhardt. Not only he should pull eyes when he opens the “Playboy”. For eleven years, Tom Gerhardt imitated the title character in the… Driven through a red light Charles’ coronation planner loses driver’s license 09/26/2022, 9:29 PM For 20 years, the Duke of Norfolk has been organizing the Queen’s state funeral. Now he should also be responsible for the coronation of King Charles. However, a court does not see this as a reason to let him get away… After the Queen’s title was revoked Danish princess is bullied at school 10/02/2022 13:19 hrs After the sudden withdrawal of the title by Queen Margrethe II, the young Danish royals are already feeling the consequences. Especially the youngest, Princess Athena, is having a hard time at school. Prince Joachim and Princess Marie make serious allegations…