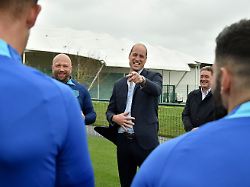 ‘Charlotte is good in goal’
Prince William looks around the stadium

The English are doing well – at least when it comes to football against Germany. In both the men’s and women’s European Championships, the “Three Lions” recently kicked the German teams out of the tournament. This is sure to delight Prince William when he visits a stadium in Staffordshire.

As is known, not kings and princes, but football rules the world. And so Prince William honored St. George’s Park football center in Staffordshire for its tenth anniversary. The Prince of Wales met para footballers, young players and participants in this year’s “Street Child World Cup”.

The talks focused on the opportunities that the 130-hectare national football center offers players. The 40-year-old officially inaugurated St. George’s Park along with Princess Kate ten years ago. Since 2012, it has been the base for the national senior, men’s, women’s, para and development teams.

George and Charlotte are also enthusiastic about football

Prince William himself is a huge football fan and has been chairman of the FA since 2006. Apparently he infects his family with it: in 2021 he could also be seen in the stadium with his nine-year-old son, Prince George, and his wife at the European Championship matches for the men.

During a game of the England women’s football team this summer, the prince revealed that his seven-year-old daughter, Princess Charlotte, is also a fan of the sport. “Charlotte wanted me to tell you she’s really good at the goal,” he announced, according to Hello! magazine, calling her a “rising star.”

Before her European Championship final against Germany, the young princess wished the English women’s team success in a video message at the end of July. Apparently that worked: the football players were later presented with the trophy by Prince William.

A visit to the stadium was one of William’s first appointments as the new Prince of Wales. After the death of Queen Elizabeth II, the new king, Charles III, bestowed upon him the title. William’s wife Kate has since been Princess of Wales. Most recently, Charles and his late wife Diana had borne the titles. The contents in the “archives” were created and posted by the previous owners of this website. We are not responsible for any misleading or incorrect content that is posted here. Funeral of the Queen Therefore, the place remained for King Charles III. empty 20-09-2022, 07:19 hrs St. George’s Chapel is packed for the Queen’s state… The contents in the “archives” were created and posted by the previous owners of this website. We are not responsible for any misleading or incorrect content that is posted here. After more than 50 years Tablecloth with Beatles drawings reappears 10/12/2022, 10:18 am In 1966 the Beatles also played in the US. Before a concert… The contents in the “archives” were created and posted by the previous owners of this website. We are not responsible for any misleading or incorrect content that is posted here. Scandal over anti-Semitic post Kanye West appealed to Mark Zuckerberg on Twitter 10/09/2022, 4:50 PM Due to an alleged anti-Semitic outburst, the network company Meta… The contents in the “archives” were created and posted by the previous owners of this website. We are not responsible for any misleading or incorrect content that is posted here. “Find you immediately visible” Heidi’s top model Lou-Anne loves a football player 09/01/2022, 13:20 hrs In “Germany’s next top model” she leads the way this… The contents in the “archives” were created and posted by the previous owners of this website. We are not responsible for any misleading or incorrect content that is posted here. From Sunday Peter Kloeppel will be in a new studio. There he will continue to moderate RTL Aktuell – but just a little differently. In… The contents in the “archives” were created and posted by the previous owners of this website. We are not responsible for any misleading or incorrect content that is posted here. “Yes, we are a couple” Sky du Mont presents his new love 09/01/2022 10:31 am Sky du Mont has already had four marriages. Even his…