The Popocatépetl volcano registered 71 exhalations in the last 24 hours, according to daily surveillance carried out by the National Center for Disaster Prevention (Cenapred) together with the National Autonomous University of Mexico (UNAM).

For now, Don Gojo -as it is also called- is in the yellow phase 2according to the Volcanic Alert traffic light from Cenapred and UNAM.

Therefore, the population is called on not to approach the volcano, especially the crater, because of the danger of falling ballistic fragments.

During heavy rains in the Popocatépetl area, it is important to stay away from the bottom of the gorges due to the danger of mud and debris flows.

Federal authorities urged citizens to ignore rumors and pay attention to the information released by the National Civil Protection Coordination through their official channels and accounts: www.gob.mx/cenapred and @CNPC_MX on Twitter.

Cenapred also has the following phone numbers for emergencies related to volcanic activity: 800-713-4147 and 911.

to warn the danger in which an active volcano hoverslike Popocatépetl, Cenapred and UNAM have them Volcano warning traffic light.

Like any other traffic light, the Volcanic Alert has three colors: green, yellow and red. Then we explain what each color means:

Green color means everything is normalthis color has two phases in which phase one means that the volcano is quiet while in the phase two there are only minor signs of activity such as fumaroles and sporadic seismic activity.

The yellow color indicates that the volcano’s activity is greater. This color is divided into three phases:

phase twothe volcano shows an increase in activity with sporadic explosions, a continuous plume of steam and water, light to moderate ashfall in nearby towns, the release of glowing fragments and the possibility of short-range pyroclastic flows associated with the explosions, Growth and destruction of lava domes, as well as short-range mud or debris flows.

phase threethe volcano exhibits explosive activity of medium to high magnitude, rapid growth of large domes and their destruction by powerful explosions, clouds of water vapor, gases and persistent ash, explosions of increasing intensity with the release of incandescent fragments, the possibility of medium-range pyroclastic flows and the notorious ash rain in the vicinity located cities.

The red color means there is danger and you must be ready to evacuate.. This color is divided into two phases:

phase onemeans that the volcano has explosive activity of medium to high magnitude, the emission of water vapor and gas columns is several kilometers high, firing incandescent fragments on the slopes of the volcano, significant ash fall in distant cities and towns, and pyroclastic flows and mudflows that reach nearby populations. 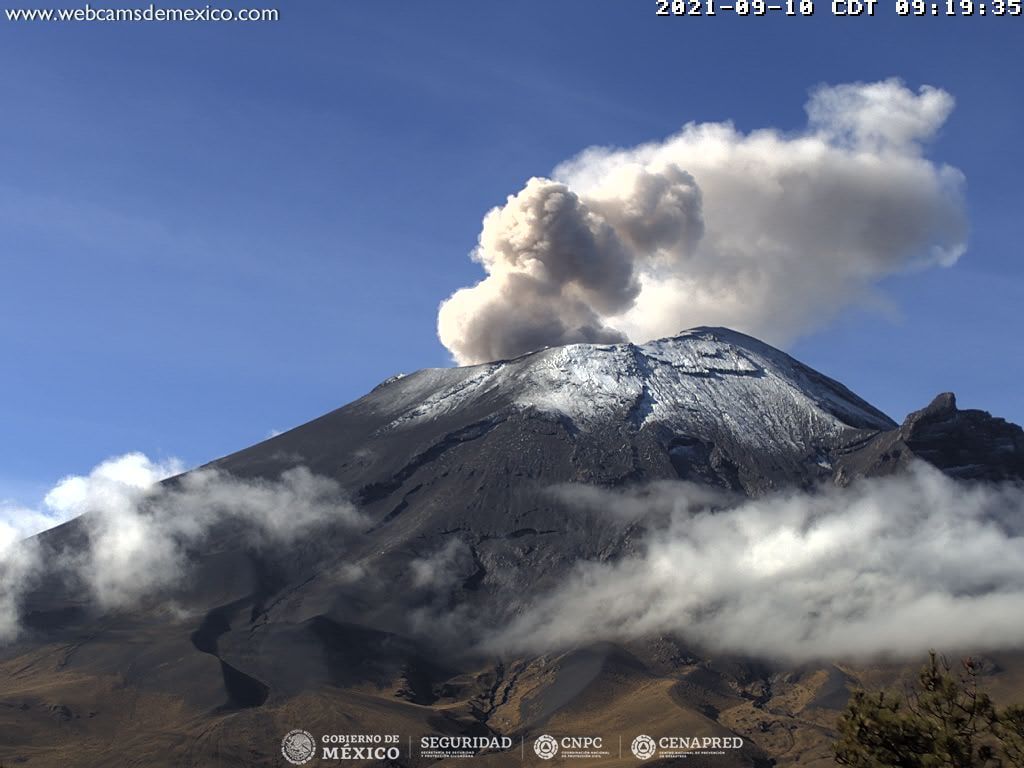 One of the country’s most active volcanoes, Popocatépetl is located within the territorial boundaries of the Morelos, Puebla and State of Mexico entities, but close to Mexico City and Tlaxcala.

The Popocatépetl volcano has a height of 5,000 meters above sea level, making it the second highest in the country.

“Don Goyo” remains active and is the fifth volcano that could erupt in the coming years, according to scientists from the University of Manchester.

Mexico, a country of volcanoes

There are at least 46 active volcanoes in Mexico, six of which are classified by Cenapred as high-risk volcanoes, which is why Cenapred monitors their activity for a timely response in the event of an emergency or major eruption.

The most dangerous volcanoes are: Popocatépetl; the fire volcano in Colima; the Ceboruco in Nayarit; the Pico de Orizaba, in the borders of Veracruz and Puebla; the Chichón in Chiapas and the Tacaná, which is on the border with Guatemala.

In the event of a large explosion from Popocatépetl, it would not trigger a chain detonation, since each volcano is independent, each has its own channels, its own sources of magma that are not directly connected to each other, so the activity of one volcano It will follow the activity of other volcanoes not affect up or down.

MEXICO CITY (AP) — Argentina coach Diego Cocca unexpectedly resigned as Atlas coach on Friday after winning Mexico’s last two soccer titles. Cocca, 50, spent the last two as coach of the Foxes, with whom he broke a 70-year non-title drought in last year’s Apertura. In addition, Cocca won the title at this year’s Clausura,…

(Update with the players who will play the second semi-final) Sports Editor, Sep 23 Italian Lorenzo Sonego meets Poland’s Hubert Hurkacz, the second favorite, and Swiss Stan Wawrinka with Kazakh Alexander Bublik in the semifinals of the ATP 250 tournament in Metz (France). Sonego (No. 65 ATP) beat American Sebastian Korda (No. 49) with a… The Pumas could not against South Africa in Avellaneda (Picture: Reuters) That Liberators of America de Avellaneda disguised to receive a key game in the Rugby Championship: The Cougars they confronted the springbok with a chance to be just one shot away from winning the title in this competition. Although they fought to the end,…

CHICAGO (AP) — Two people have come forward to claim a $1.337 million US Mega Millions lottery jackpot after it was announced in late July that a single ticket had won the drawing and that it was in had been sold in a suburb of Chicago. Both winners, who wished to remain anonymous, opted for…