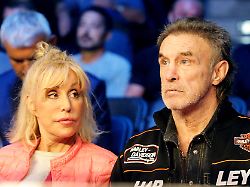 Former boxing pro René Weller has been dependent on care since his dementia. Now his wife Maria is sounding the alarm: the condition of the 68-year-old is getting worse. But she cannot afford adequate care at home.

Former German professional boxer René Weller suffers from dementia. The ex-top athlete is cared for by his wife Maria. But now the 68-year-old’s condition has deteriorated significantly. “René now needs total care. He can no longer do anything alone,” explains Weller’s wife in an interview with the newspaper “Bild”.

“He has trouble swallowing, needs help with eating, showering, going to the toilet.” He recognizes her, but Weller does not remember “that I am his wife”. She has no prospect of enlightenment. “We can’t afford a place in a nursing home,” says Maria Weller.

Weller’s wife scolded, “It’s become a luxury and priceless. That’s our Germany. It’s pathetic.” René Weller only receives a pension of 270 euros per month. “We still have some savings.” If they had to fall back on it, “we will soon be hopelessly poor” and “can’t live anymore”.

René Weller was already in a clinic

The boxing officials would no longer care about her husband. “He was just taken advantage of,” she continues. Doctors would also attribute his dementia to the multiple blows to the head he received during his boxing career. “Anyone who gets sick is eventually left alone.” That makes her “angry and sad”.

Maria Weller had already spoken to the newspaper “Bild” in the summer of 2021 about her husband’s dementia. A nursing home was not a problem then. She stated: “As long as I can, I will be there for my René.” In July 2022, the ex-boxer was admitted to the main clinic of Heidelberg University Hospital. “It literally slipped between my fingers,” said the 70-year-old, who René Weller has been married to since 2013, at the time of the newspaper. The clinic is “the only real way out. And I know it’s in the best hands there.”

As a professional, René Weller was, among other things, German champion and two-time European champion of the European Boxing Union (EBU). He ended his career almost 30 years ago. He was also seen on TV. In the summer of 2016, he and his wife participated in the RTL format “Das Sommerhaus der Stars”. The contents in the “archives” were created and posted by the previous owners of this website. We are not responsible for any misleading or incorrect content that is posted here. After only a year Jeff Bezos’s ex is getting divorced 29/09/2022, 09:42 hrs MacKenzie Scott was married to Amazon founder Jeff Bezos for 26 years… The contents in the “archives” were created and posted by the previous owners of this website. We are not responsible for any misleading or incorrect content that is posted here. Out for jungle camp icon Dr Bob gives Britten a basket 27/09/2022, 3.30 pm (updated) He is the doctor trusted not only by women in… The contents in the “archives” were created and posted by the previous owners of this website. We are not responsible for any misleading or incorrect content that is posted here. It’s been eight years since Wanda released their first album “Amore”. At one point, the Austrians also convinced the German public of their qualities with… The contents in the “archives” were created and posted by the previous owners of this website. We are not responsible for any misleading or incorrect content that is posted here. Beaten and doused with beer Jolie accuses Pitt of violence 10/5/2022 4:23 pm Angelina Jolie and Brad Pitt were married for just two years before… The contents in the “archives” were created and posted by the previous owners of this website. We are not responsible for any misleading or incorrect content that is posted here. Comeback after career break Jürgen Drews is back on the podium 09/05/2022 10:49 am In July, Jürgen Drews announces the end of his career. But… The contents in the “archives” were created and posted by the previous owners of this website. We are not responsible for any misleading or incorrect content that is posted here. Queen Margrethe II is in quarantine, Helene Fischer wants to remove the public from everyday life and Gil Ofarim’s lawyer speaks of a show trial…