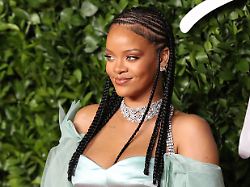 First, American singer Taylor Swift was in talks for the halftime show of the upcoming Super Bowl. The NFL is now clearing up the rumors and announcing: Rihanna is taking over the giant show.

During the upcoming NFL Super Bowl, Rihanna will be the star of the halftime show. That has been announced by the National Football League. The 34-year-old from Barbados is one of the most successful artists in the world. The Super Bowl is scheduled for February 12, 2023 in Glendale, Arizona. Several rap and hip-hop stars performed together at the last Super Bowl in Los Angeles, including Snoop Dogg, Eminem and Dr. dr The year before, Shakira and Jennifer Lopez performed together.

“Rihanna is a unique performer who has been a cultural force throughout her career,” the NFL said in a statement. We look forward to working together. Rihanna has been in the headlines lately because of her pregnancy. In May, she gave birth to her first child. The son’s father is American rapper A$AP Rocky.

Just a few days ago, it was revealed that Taylor Swift had apparently turned down the offer to perform on the halftime show. This is reported by various American media, including “People” and “TMZ”. As “TMZ” claims to have found out, the singer was asked to headline “months ago”. Her answer was clear: she didn’t want to perform until she’d re-recorded her first six albums.

Speculation started when the NFL announced that Apple Music would replace Pepsi as the title sponsor of the Super Bowl. Fans of Taylor Swift believed that the Coca-Cola ambassador could now appear. According to TMZ, Taylor Swift “wants” to perform at the Super Bowl. It just doesn’t fit right now. An appearance at the 2024 Super Bowl is dependent on the completion of the new footage. The contents in the “archives” were created and posted by the previous owners of this website. We are not responsible for any misleading or incorrect content that is posted here. “It breaks my heart” Singer Michelle cancels entire tour 09/06/2022, 09:50 o’clock Michelle has been suffering from back pain since she took part in “Let’s… The contents in the “archives” were created and posted by the previous owners of this website. We are not responsible for any misleading or incorrect content that is posted here. Millions want to say goodbye Guard collapses on queen’s coffin 9/15/2022 4:54 a.m. Anyone wishing to pay their last respects to the late Queen needs… The contents in the “archives” were created and posted by the previous owners of this website. We are not responsible for any misleading or incorrect content that is posted here. After tragedy on set Alec Baldwin will be back acting soon 8/31/2022, 2:13 PM Last year, Alec Baldwin accidentally shot and killed a camerawoman on… The contents in the “archives” were created and posted by the previous owners of this website. We are not responsible for any misleading or incorrect content that is posted here. “I underestimated that” Queen Margrethe apologizes 10/04/2022, 4:15 PM Things are rumbling in the Danish royal family. Prince Joachim and his wife Marie are not… The contents in the “archives” were created and posted by the previous owners of this website. We are not responsible for any misleading or incorrect content that is posted here. Network puzzles about video clip Is Harry Styles Spitting Into Chris Pine’s Lap Here? 09/07/2022 8:54 PM A short video is said to show Harry… The contents in the “archives” were created and posted by the previous owners of this website. We are not responsible for any misleading or incorrect content that is posted here. Revelations about incident 2019 Has Harry rejected reconciliation talks with William? 10/3/2022 4:57 PM The rumor mill is bubbling like never before. Several tell-all books…