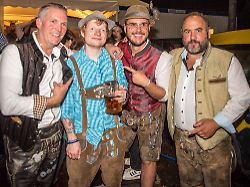 Impromptu concert
Ed Sheeran surprises at the Oktoberfest in Frankfurt

Appropriately dressed in lederhosen and felt hat, Ed Sheeran surprises the visitors of the Oktoberfest in Frankfurt in a special way. After his concert in the Deutsche Bank Park, the British superstar is of course not only hungry for beer and pretzels.

61,0000 people celebrated superstar Ed Sheeran in Frankfurt’s Deutsche Bank Park on Saturday night. While most concertgoers went home after their idol’s performance, the musician celebrated a very special after-show party: at the Oktoberfest in Frankfurt. Because the tent is conveniently located on the stadium grounds.

The singer surprised the Oktoberfest visitors in the tent, unpacking his guitar and promptly playing his own songs. In a clip published by the official Instagram account of the Frankfurt Oktoberfest, the musician can be heard singing his emotional hit “Perfect”.

Ed Sheeran appeared appropriately dressed for the Oktoberfest in Frankfurt: He stood by the microphone in leather pants with suspenders and a felt hat, and the beer measure in his hand could not be missing, as seen in an Instagram story. “If you have a drink in your hand, drink it now,” he says in another story. He then takes a sip of his beer.

Ed Sheeran not only delighted the partygoers with his own songs. Also featured were “Everybody” by the Backstreet Boys and “Uptown Funk” by Bruno Mars, as other Instagram stories prove.

Also in Munich, Sheeran recently offered his fans a great show: he played most of his songs alone on the stage in the middle of the stadium, only with a guitar and a loop station. He was not deterred by a momentary power outage.

In an emotional moment, the Briton commemorated the late Queen Elizabeth II (1926-2022). He dedicated the song “Perfect” to her, which he also performed on her platinum throne anniversary in June. At the time, he performed his hit in pictures of the Queen and her husband, Prince Philip (1921-2021), who also perished. The contents in the “archives” were created and posted by the previous owners of this website. We are not responsible for any misleading or incorrect content that is posted here. Coffin of the late monarch Queen is laid to rest in English oak and lead 14/09/2022, 3:58 PM The coffin in which the late Queen… The contents in the “archives” were created and posted by the previous owners of this website. We are not responsible for any misleading or incorrect content that is posted here. “Not looking for a wife for life” Jauch wants to get rid of the procrastinating candidate By Nina Jerzy 29/08/2022, 10:15 PM After what feels… The contents in the “archives” were created and posted by the previous owners of this website. We are not responsible for any misleading or incorrect content that is posted here. After months of radio silence Mourning Queen Reunites William, Harry, Kate and Meghan 09/10/2022, 10:21 PM Actually, Britain’s Princes William and Harry are at odds…. The contents in the “archives” were created and posted by the previous owners of this website. We are not responsible for any misleading or incorrect content that is posted here. With Meghan and the kids? Harry will stay in London until the funeral 9/9/2022, 5:08 PM There has been a strained relationship between Prince Harry… The contents in the “archives” were created and posted by the previous owners of this website. We are not responsible for any misleading or incorrect content that is posted here. Out after 35 years Broadway cancels Phantom of the Opera 9/17/2022 5:04 a.m. In February, after more than three decades, it should be over: “Phantom… The contents in the “archives” were created and posted by the previous owners of this website. We are not responsible for any misleading or incorrect content that is posted here. Fifth season of “The Crown” Set photos show Elizabeth Debicki as Diana 09/06/2022 12:06 pm It won’t be long before the fifth season of “The…