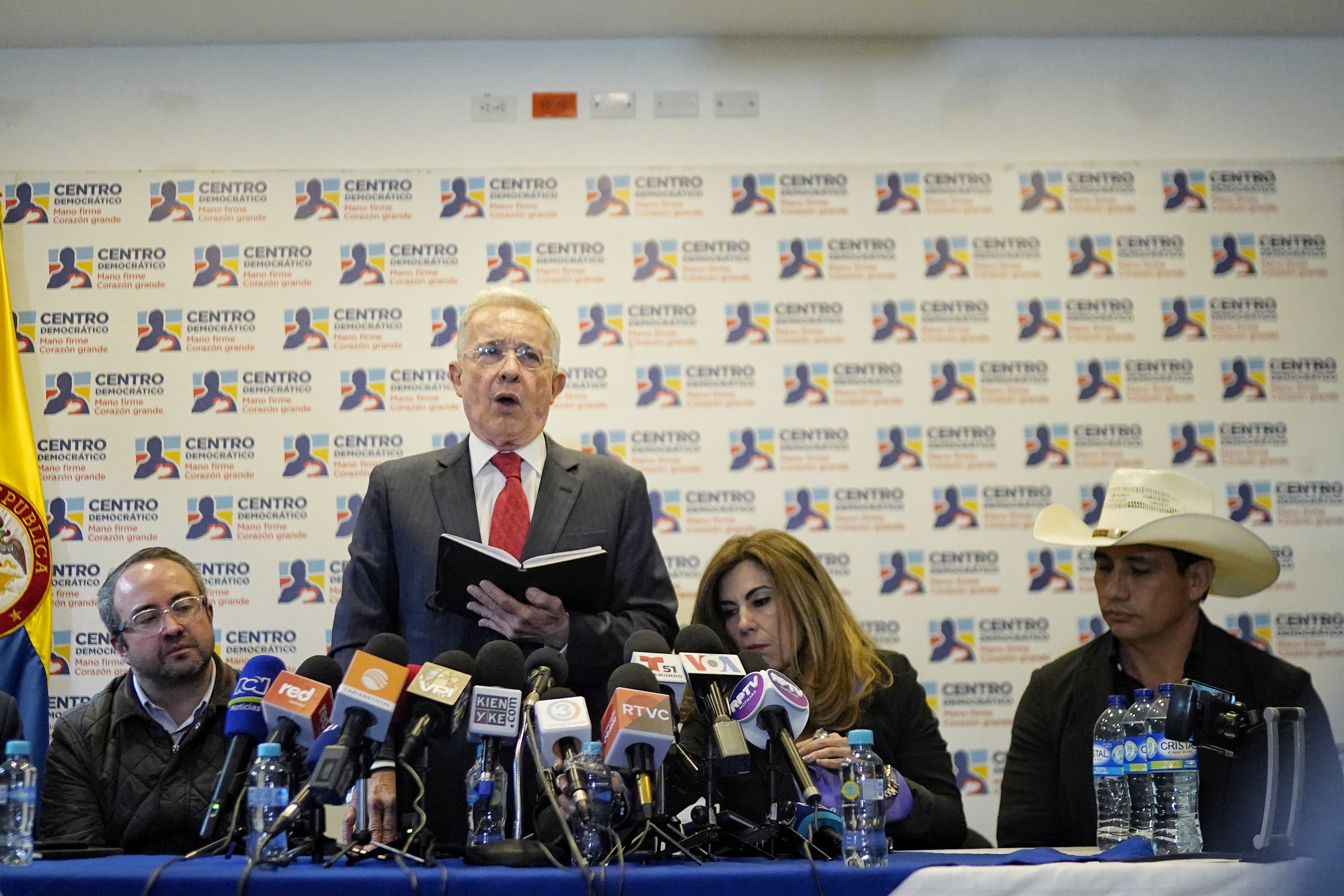 Former President Álvaro Uribe made statements to the media after meeting with President-elect Gustavo Petro at the Democratic Center party’s headquarters. (Colprensa-Sergio Acero)

A few days ago, Colombia’s President Gustavo Petro met with former President Álvaro Uribe Vélez, opposition leader who has spoken out against the new government just two months after the change of government. After a few days and the comments made, Uribe Vélez referred to the meetings and stated that his interest would be to continue being an interlocutor on the various conjunctural issues, in this sense he stated that this was one of the priority points that of the perfect peace.

In addition, he indicated that his Democratic Center party would continue the analysis of Law 418, or public policy. Therefore, he announced that every step and discussion that I know of on the subject will be made known to the Colombians who are most interested in staying informed.

“We spoke to him about the need to update the country. Neither the President nor we are interested in secret meetings. As soon as the issue of peace has been raised, the party will already start considering legislative reform,” the former president said.

For now, the right-wing leader’s supporters are waiting for the next meeting and its results.

The first meeting, which took place in the office of lawyer Héctor Carvajal, who had defended Medellín Mayor Daniel Quintero while being disqualified by the Attorney General’s Office, lasted about half an hour.

Great expectations were raised for this meeting, which was being considered as part of the President’s proposed Grand National Accord. In fact, Uribe had accepted Petro Urrego’s invitation, indicating that both his vision and that of Bogotá’s former mayor were “different in the same country.” The meeting was also attended by Nubia Stella Ramírez, director of the Democratic Center, as well as other members of this party; and Alfonso Prada, head of the President-elect Debate.

After leaving the meeting, the former president gave his conclusions of the meeting, in which he highlighted Gustavo Petro’s willingness to engage in dialogue and indicated that communication channels have been set up that allow consensus to be reached on economic, political and security issues.

“There are agreements with President Petro on this matter as part of the overall solution to violence and security,” Uribe noted.

Reactions from the various political sectors were immediate; For example, several lawmakers have given favorable judgments about the rapprochement made between the two; it is a significant achievement to put the two ideological sectors around a dialogue table and reach consensus; One of the first to address the issue was Historic Pact Senator Iván Cepeda, who has held various legal talks with the former president. Through his Twitter account, he welcomed this rapprochement between the two most influential political figures in Colombia in recent years.

Referring to one of the photos left from the meeting, where they chatted in an affable manner, Cepeda said the picture “represents what we see in Colombia’s political life in the new era that began on June 19, want to let it happen.” .

In passing, he pointed out that “dialogue is increasingly serving as a way of solving problems, finding ways to peace and deepening democracy”. For her part, María José Pizarro stressed that it had been “a historic week”. Armando Benedetti strongly emphasized that “change began” and accompanied this message with another image of the meeting.

The Petro government has refrained from seeking the extradition of two ELN negotiators who are in Cuba
Yellow hospital alert issued in Barrancabermeja after large-scale explosion in an oil field
Don’t get caught in traffic! These are the road closures for the Bogotá Half Marathon taking place this Sunday Both staged a tough argument on Twitter. Photo: file. One feels tension in the Twitter network when one reads the exchange of words between the mayor of Medellín, Daniel Quinteroand the Senator from the Democratic Center Maria Fernanda Cabal. It all started when Quintero announced important news regarding his cabinet: he asked his entire government…

(add details, context and citations; add authors) By Philip Pullella and Charlotte Van Campenhout VATICAN CITY, Sept 20 (Reuters) – Flemish Catholic bishops released a document on Tuesday effectively allowing the blessing of same-sex partnerships, in an apparent direct challenge to a ruling against such practices issued by the Office of Vatican Doctrine last year…. Nikko Ponce refers to his performance in Contigo Capitán. | Instagram Nikko Ponce take that into account when embodying the proposal Paolo Guerrero in “With You Captain”He had already thrown in the towel from acting and lived with his mother and girlfriend on the beach, away from the city. He remembers doing as much casting… Germany creates its own national security strategy for the first time. It aims to reflect a broad consensus in society and will be developed with the participation of citizens and experts. In July, Foreign Minister Annalena Baerbock visited some of the seven town halls across Germany. Fabio Flügel tells us about the meeting in Hof,… Ukraine announced the release of Torske in Donetsk, one of four occupied regions annexed by Russia REUTERS/Jorge Silva/File Photo The Ukrainian army announced the liberation of the city on Monday torskein Donetskone of the four occupied regions that Russia was added. The Speaker of the Eastern Group of the Armed Forces of Ukraine, Serhi Cherevatymade…

Lviv (Ukraine), 2 Oct. Ukrainian President Volodymyr Zelenskyy said his country’s flag is already flying in many places in the Donbass where Russia has held referenda on the annexation, which he described as a “farce”. “Russia staged a farce in the Donbass. An absolute farce that it wanted to portray as referendums,” Zelenskyy said in…