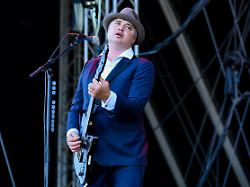 Pete Doherty was known as a musician with drug problems. He also made headlines as having an affair with Kate Moss. Today, the 43-year-old has caught himself, although he still plays music, but he also devotes himself to art. He will soon show the results of his efforts in Berlin.

Peter Doherty presents himself with a first retrospective as a visual artist in Berlin. The exhibition “Contain yourself (seriously)” shows about 50 works by the British musician, who became world famous with the bands Babyshambles and The Libertines, among others.

From September 10 to December 22, works from mixed media, collages, original texts and typewriter art can be seen in the gallery of Janine Bean and Matthias Bergemann. In addition, objects from the everyday life of Doherty, who is also known for his past drug addiction, the one-time collaboration with model Kate Moss and a secret affair with the late singer Amy Winehouse were also installed.

The starting gun was fired in 2015

“Music is much more complicated,” Doherty says of his work. Many of the works are influenced by music. One work is based on the lyrics of the Libertines song “Belly of the Beast,” right opposite the answer to the ad for a Hong Kong concert in 2015. “The poster for the festival was terrible,” Doherty said. “So I did this in my hotel room.” It was based on an old Chinese ad for cigarettes, which Doherty repurposed with letters sprayed with multi-colored stencils.

Many of the works date from the time of Doherty’s drug addiction, the effects of handling the needle are visible. In 2013, he painted a “Union Jack” – the English flag – with his blood. “It had a huge impact on my state of mind at the time,” Doherty says. “I think without this chaos in my life and without the drugs, art would be very different.”

After many scandals in the past, Pete Doherty caught himself. He now lives in Normandy with his wife Katia de Vidas, the keyboardist of his band The Puta Madres. “It’s a quiet, simple life,” the 43-year-old said in an interview with Britain’s Mirror in March. The contents in the “archives” were created and posted by the previous owners of this website. We are not responsible for any misleading or incorrect content that is posted here. “Average and disgusting” Selena Gomez defends Hailey Bieber 30/09/2022, 13:42 hrs Justin Bieber and Selena Gomez were once the dream couple for many. But the… The contents in the “archives” were created and posted by the previous owners of this website. We are not responsible for any misleading or incorrect content that is posted here. Award for the panic rocker Udo Lindenberg is an honorary citizen of Hamburg 09/07/2022 22:03 Now it’s official, the rock musician Udo Lindenberg is an… The contents in the “archives” were created and posted by the previous owners of this website. We are not responsible for any misleading or incorrect content that is posted here. Visit to the Brandenburg Gate Felipe and Letizia standing in the rain 19-10-2022 10:32 am At the arrival of the Spanish King Felipe VI. and… The contents in the “archives” were created and posted by the previous owners of this website. We are not responsible for any misleading or incorrect content that is posted here. On the hunt for the headhunter Candidate of Günther Jauch receives numerous letters 14/09/2022, 17:18 hrs Last Monday, “Who Wants to Be a Millionaire?” short… The contents in the “archives” were created and posted by the previous owners of this website. We are not responsible for any misleading or incorrect content that is posted here. Die Queen-Enkelin Prinzessin Beatrice hat nach dem Aussegnungsgottesdienst ihrer Großmutter in Windsor unter Tränen die Kirche verlassen. Auf Fernsehbildern war Beatrice gemeinsam mit ihrer Mutter,… The contents in the “archives” were created and posted by the previous owners of this website. We are not responsible for any misleading or incorrect content that is posted here. “Sex and the City” sequel Will Charlotte York go to jail? 10/06/2022 22:07 In the summer of 2023, the spin-off of the hit series “Sex…