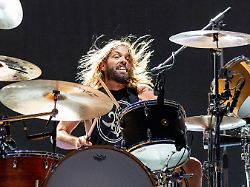 In the spring, Foo Fighters drummer Taylor Hawkins dies suddenly and unexpectedly just after his 50th birthday. There’s a star-studded concert in his honor next weekend at London’s Wembley Stadium, which can also be followed from Germany.

In March of this year, Taylor Hawkins was found dead in a hotel room in Colombia. In honor of the musician, his band Foo Fighters, his family and Paramount are organizing a “global music event” at London’s Wembley Stadium on September 3.

In addition to Hawkins’ band, the lineup for the Taylor Hawkins Tribute Concert includes many big names: Travis Barker, Liam Gallagher, Josh Homme of Queens of the Stone Age, Kesha, Queen’s Brian May, Nirvana’s Krist Novoselic, Nile Rodgers of Chic and Lars Ulrich of Metallica is on stage, among others.

Special appearances have also been announced by comedians and collaborators Dave Chappelle and Chris Rock. The proceeds of the ticket and merchandise sales of the concert will go to the charities Music Support and MusiCares.

Wembley Stadium is the largest football stadium in Great Britain and has a capacity of approximately 90,000 spectators. But even those who are not there can at least follow the Hawkins tribute concert on the screen. The entire show will be streamed live and on-demand through Paramount’s streaming and digital platforms. In addition, MTV will broadcast the event live on Saturday from 5:30 p.m. On Sunday 4 September, the music channel will also broadcast a one-hour special. This is followed by a two-hour compilation of the concert, which will also be available worldwide in September.

It doesn’t stop at the concert at Wembley Stadium. The Foo Fighters had announced a similar tribute in Los Angeles on September 27. According to an August 17 Instagram post, Pink, Miley Cyrus and Alanis Morissette are among the stars.

Taylor Hawkins died on March 25 at the Hotel Four Seasons in Bogotá. Shortly afterwards, Colombian police went out with details of an initial toxicology study. This “preliminarily identified 10 different types of substances,” including THC — found in marijuana — tricyclic antidepressants, benzodiazepines and opioids, researchers said. They did not say whether the drugs led to the musician’s death. At the end of 2018, “Spiegel” employee Claas Relotius was exposed as a scammer. Many of his award-winning stories are fictional. Bully Herbig addresses this scandal with the media satire “A Thousand Lines”, in which Elyas M’Barek plays investigative journalist Juan Moreno. It is messages like “The boy who started the Syrian war” or an… “Stroke or Zubotoxed” Oliver Pocher humiliates ex-girlfriend 09/28/2022, 8:44 PM Oliver Pocher has never been known for his charm. This time, however, the comedian takes the low blow. In his podcast “The Pochers!” the 44-year-old makes dubious jokes about ex-girlfriend Monica Meier-Ivancan. Meanwhile, wife Amira receives difficult birthday wishes. In his podcast “Die Pochers!” omitted… Compensation for crash photos Jury awards millions to widow of Kobe Bryant 25/08/2022 02:49 hrs After the fatal helicopter crash of NBA superstar Kobe Bryant, emergency services are said to have “showed” photos of the accident site. On the other hand, widow Vanessa Bryant went to court – and was proved right. Los Angeles County…