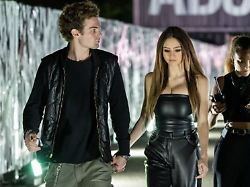 It works for Leni Klum. Not only in terms of catwalk career, but apparently also in love. The 18-year-old is now very intimate with her boyfriend Aris Rachevsky at fashion week in Milan. Mama Heidi’s heart goes up too.

They were certainly one of the real eye-catchers at Milan Fashion Week: Leni Klum and her boyfriend Aris Rachevsky. Hand in hand and perfectly styled, the two presented themselves to the photographers.

But her boyfriend, born in 2003, had also thrown himself into a casual outfit. Rachevsky wore khaki wide-leg pants and a black quilted vest over a dark sweater.

Leni Klum opened “About You Fashion Week” in Milan, which her mother, Heidi Klum, was also very proud of. The 49-year-old posted several clips on her Instagram page showing her daughter on the catwalk, in the dressing room or talking to other participants in the event.

In an interview, the “model mother” then talked about her daughter’s first year on the catwalk and was particularly enthusiastic about Leni’s “authenticity”. “It went very well,” concludes Heidi Klum. At the same time, she explained what she thought was the biggest difference between her and her daughter: “She’s not really like me. I love being a richly decorated Christmas tree.”

You don’t need it to feel comfortable, Heidi Klum kept blurting out. “Then I can make myself comfortable in my coffin.”

Leni Klum is the eldest child of the presenter of “Germany’s next top model”. She comes from a relationship between her mother and Formula 1 manager Flavio Briatore. She has three half siblings – two brothers born in 2005 and 2006 respectively and a sister born in 2009. These come from Heidi Klum’s later marriage to singer Seal, which broke up. The presenter is now married to Tokyo Hotel musician Tom Kaulitz.

(This article was first published on Thursday, September 22, 2022.) Reconciliation may be near Do Charles III. and Harry a deal? 9/27/2022, 11:47 AM The dispute between Prince Harry and King Charles III. can be over soon. At least that’s what the British media are speculating about and reporting on a father-son deal intended to bring peace to the family. Is the ice age between… Autumn can come Lena got her hair out 23-09-2022, 11:15 am Actually, short haircuts are more for summer. But Lena Meyer-Landrut chooses the countercyclical path, dropping the wool just in time for the onset of fall. “Somehow it has something of the young Victoria Beckham,” some say. “I even did my hair for you” (“I… Shortly after the Queen’s death Royal biographer: ‘My daughter saw Charles’ red eyes’ 13/09/2022 7:52 am Andrew Morton is familiar with the British royal family – he once heard the confession of Princess Diana. The new king Charles III. he trusts a lot. But he also knows of his emotional reaction to the Queen’s death…. “Always do these moves” Melanie Müller explains the Hitler salute 28/09/2022, 15:19 hrs A video shows Melanie Müller surrounded by fans shouting “Sieg Heil”, now a second clip appears in which she herself shows the Nazi salute. The police are investigating. In return, the Ballermann singer states that she has nothing to do with right-wing… After the main character’s death Filming of “The Crown” is scheduled to pause 9/9/2022, 2:05 PM The fifth season of the hit Netflix series “The Crown” is currently being filmed and will focus on Queen Elizabeth II from the start. After her death, the makers probably want to take a break to pay their last…