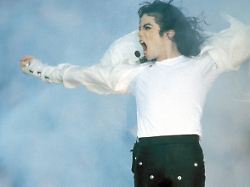 King of Pop would 64 . to be
Paris, Prince & Co remember Michael Jackson

Michael Jackson’s memory has cracked in the shadows of the posthumous allegations of abuse against the singer. Last but not least, his children still honor their father, of course. So now on the day he would have turned 64.

Michael Jackson would have turned 64 on Monday. On this occasion, his children and other relatives remembered the late singer with posts and touching words on Instagram.

Michael Jackson’s son Prince published old family photos with his father in a post. The 25-year-old wrote: “Happy birthday! I miss you more and more and love you more every day. Thank you for everything.”

Paris Jackson, 24-year-old daughter of the King of Pop, remembered the musician with a father-daughter photo in her Instagram story. She just added a heart emoji and the letters “hbd” (“Happy Birthday”).

Michael Jackson’s sister, La Toya Jackson, shared a clip of her brother’s performance at the 1995 MTV Video Music Awards. “What a great performance! Happy Birthday,” she captioned the recording. Under Prince Jackson’s post, she also wrote, “Prince, he loved you with all his heart! Thank you for making him proud!”

Michael Jackson’s nephew TJ Jackson writes on Instagram about a photo of the singer, among other things: “No one will ever be like you. Thank you Uncle Michael for being here. I will always honor and be grateful to you. I love you and miss you every day .”

Other Instagram users also paid tribute to the late music legend on Monday, including celebrities such as model Naomi Campbell. “Congratulations, Michel Jackson, King of Pop, today would have been your 64th birthday. You will always remain in our hearts,” the 52-year-old comments on old souvenir photos with the singer.

With hits like “Billie Jean”, “Bad” or “Earth Song”, Michael Jackson is considered one of the most successful pop artists of all time, earning him the nickname “King of Pop”. His 1982 album Thriller remains the most successful full-length in music history, selling at least 65 million copies.

During his lifetime, allegations were made that Jackson had sexually abused children. The allegations did not disappear even after the musician’s death, but to this day have not been fully clarified. Michael Jackson died on June 25, 2009 from poisoning with the anesthetic propofol. The drug had been given to him on request because he was sleep deprived. He was 50 years old. “Beast – Hunters Without Mercy” Two children, one father, no survival instincts By Linn Penkert 25/08/2022, 5:38 PM They want to have a good time in Africa to cope with the death of their mother. But soon Nate Samuels (Idris Elba) and his two daughters face a bloodthirsty lion in “Beast”. They couldn’t do more… Queen Margrethe II is in quarantine, Helene Fischer wants to remove the public from everyday life and Gil Ofarim’s lawyer speaks of a show trial against his client: Vip Vip, Hooray! – the celebrity week recap is here. Due to the current situation in Germany and Europe, many people have lost all understanding of party-loving… Reality star from the very beginning Fred Fussbroich is dead 10/18/2022, 4:40 PM Today there are reality TV documentaries in which more or less prominent protagonists are followed in their daily lives, like sand on the sea. The series on “Die Fussbroichs” did groundbreaking work for this. Now the head of the family, Fred, has… After accusations against frontman Singer Feist cancels tour with Arcade Fire 2022-09-02 8:52 PM Arcade Fire frontman has been accused of sexual misconduct by several women. Vocalist Feist, who was actually supposed to support the band on the current tour, is now taking the consequences. “I can’t go on,” she explains. The musician Leslie Feist,… Scandal over anti-Semitic post Kanye West appealed to Mark Zuckerberg on Twitter 10/09/2022, 4:50 PM Due to an alleged anti-Semitic outburst, the network company Meta is restricting Kanye West’s Instagram account. To express his outrage, the rapper reactivated his Twitter account, which he hadn’t used for years. Much to the delight of the richest man…