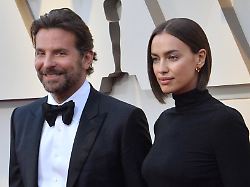 Holiday with the ex: In the case of Hollywood star Bradley Cooper and model Irina Shayk, this creates fantasies for fans. An insider even talks about baby plans. However, it should be more sober: their daughter needs a brother or sister.

This could be a dream comeback for fans: After Irina Shayk published a holiday photo with Bradley Cooper, there are now even rumors that the former couple could be open to another child. The two already have their daughter Lea (5), who was born in 2017.

The 36-year-old model published holiday photos on Instagram at the end of August. Her followers were delighted to see her next to her former partner in one of the shots. Shayk and the 47-year-old Hollywood star beam towards the camera together. In another photo, Shayk is lying in the sand with a big heart around her. Another sign of a love comeback? However, there are also a bunch of pigs in the photos, which played no part in the assumptions.

A source told Page Six: “It was a real family trip and they are considering getting back together.” But that is not everything. The anonymous source also hints that Shayk seems to want another child. “She would like to have a sibling for her daughter,” the report says.

Both have not had another “serious” partner since their split, the insider says. And they would generally like the idea of ​​having another child. According to him, it is not like Jennifer Lopez and Ben Affleck, who have found each other after years and have recently married. Instead, the thought behind it is more, “Why not?” After all, they took care of their daughter together. Shayk and Cooper broke up in 2019 after dating for about four years.

Previously, Cooper was briefly married to actress Jennifer Esposito from 2006, the marriage only lasted a few months. His other exes are Renée Zellweger and Suki Waterhouse. Just six weeks ago, however, Page Six had mentioned that Cooper was in a new relationship with one of Hillary Clinton’s closest confidants. “Just Folded” Ex-“Bachelorette” Melissa Damilia faints 31-08-22, 4.30 pm In the face of “Mister Right” the “Bachelorette” can sometimes get weak at the knees. But it probably has nothing to do with an increased love pulse that ex-Rose distributor Melissa Damilia is now getting dizzy twice in a row. First the good news: everything is… Big Hollywood Family Hilaria and Alec Baldwin welcome seventh child 25-09-2022 10:42 AM Hollywood star Alec Baldwin’s family grows and grows: his wife Hilaria has just announced the birth of little Ilaria Catalina Irena. The girl is the seventh child of the two. For the actor, it is even the eighth offspring. Another brood for… Sexual Assault in Hollywood ‘Scrubs’ producer accused of rape 10/06/2022 08:49 hrs American series creator Eric Weinberg is in the dock. He has been accused of sexual abuse in at least five cases. He is said to have lured dozens of young women to his home in Los Angeles for more than twenty years and… Pop Culture Award 2022 Music industry selects its heroes in Berlin 9/27/2022, 1:29 PM In 2021, after a Corona break of a year, the Verein für Popkultur will once again celebrate the favorite artists of the year. The sixth edition of the awards ceremony is scheduled for early October, for which both ancient warriors and… Since Alexander Scheer appeared on screen in Leander Haussmann’s “Sonnenallee” in 1999, the actor has become an integral part of the German film landscape. Most recently, he sparked enthusiasm among fans and critics alike with appearances in films such as “Gundermann” – as Gundermann – and “Rabiye Kurnaz against George W. Bush” – as lawyer…