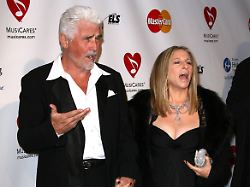 They met on a blind date and have had a stable marriage by Hollywood standards for 24 years – singer and actress Barbara Streisand and actor James Brolin. The latter now reports on the marriage secrets of the two and the source of harmony.

When actor James Brolin and singer Barbra Streisand found each other, they were already going through divorce. The two have been happily married for almost 24 years now. He is 82 years old, she 80. This is an age when wisdom in love can be reached. In a new interview, Brolin talks about that and explains why their relationship works.

“I think everyone should be an intermediary,” the “Hotel” actor told People magazine. According to him, both parties must be patient, but also know “when to go for a walk”. A partner needs to understand where “your anger and your fire come from”. And you should know that the other “will respond and you can negotiate”.

In addition, Brolin knows for sure that it is important to know the past of the partner in order to look forward to a healthy future together. He has been married to Streisand since 1998. She was divorced from her first husband, Elliott Gould, in the early 1970s. Brolin was married twice before dating Streisand – with fellow actresses Jane Cameron Agee and Jan Smithers.

The fact that they seem to be very open to each other in general also seems to play an important role in their relationship. Streisand and Brolin met on a blind date, she told W Magazine in 2016. Earlier, she expected a man with a beard and longer hair to show up. Instead, he had his hair cut and shaved. At the time, she asked him who had messed up his haircut. “He told me later that that’s when he fell in love with me,” Streisand explained. “My husband likes to hear the truth, which is unusual.” The contents in the “archives” were created and posted by the previous owners of this website. We are not responsible for any misleading or incorrect content that is posted here. The doors of Westminster Abbey are now open. Heads of state, foreign royalty, governors-general and prime ministers gradually gather at the Royal Hospital Chelsea before… The contents in the “archives” were created and posted by the previous owners of this website. We are not responsible for any misleading or incorrect content that is posted here. lost 25 kilos Ralph Siegel has a special diet 10/11/2022, 6:03 PM Reiner Calmund showed the way, now that Ralph Siegel, at age 70, has… The contents in the “archives” were created and posted by the previous owners of this website. We are not responsible for any misleading or incorrect content that is posted here. Driven through a red light Charles’ coronation planner loses driver’s license 09/26/2022, 9:29 PM For 20 years, the Duke of Norfolk has been organizing the… The contents in the “archives” were created and posted by the previous owners of this website. We are not responsible for any misleading or incorrect content that is posted here. In 2018, the case of “Spiegel” journalist Claas Relotius made headlines. Many of his award-winning articles turn out to be fake, embellished and partly fictional…. The contents in the “archives” were created and posted by the previous owners of this website. We are not responsible for any misleading or incorrect content that is posted here. Contents 1 Mourners reserve their place Queen’s coffin arrived at Buckingham Palace 2 Die-hards are looking for a place for the funeral procession 3 Report:… The contents in the “archives” were created and posted by the previous owners of this website. We are not responsible for any misleading or incorrect content that is posted here. Reconciliation may be near Do Charles III. and Harry a deal? 9/27/2022, 11:47 AM The dispute between Prince Harry and King Charles III. can be…