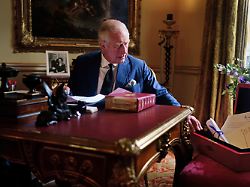 Hotline to Downing Street
What is King Charles doing with the “Red Box”?

Charles III takes over as the new king. all the duties of his late mother. Regular exchanges with the government are of course part of this. The traditional way of communicating has not changed for over 100 years.

With his new office comes new tasks for the British King Charles III. until. Now he has been photographed for the first time reading government documents from the famous Red Box. The monarch, who automatically succeeded his mother Elizabeth II on his mother’s death on September 8, can be seen sitting at an ornate desk in Buckingham Palace in the image released by the palace.

The “red box” with the government documents is on an upholstered furniture next to the table. Several papers with stamps and handwritten notes look out. In the background is a black and white photo of the king’s parents, Queen Elizabeth and Prince Philip.

The red box is a kind of hotline to Downing Street, where the British Prime Minister is. The British monarch receives daily updates on important government events and activities. Laws that must be signed before they can go into effect are also carried in luxury manufacturer Barrow Hepburn & Gale’s lockable red boxes.

While all government boxes are stamped with the royal lettering, the Queen’s personal box is engraved with “The Queen”. The king will have his own stamp. Regarding the Bax’s history, the manufacturer shared that the box’s role in the government process “hasn’t changed in over a century.”

According to the manufacturer, there are two theories for the iconic red color. The widely accepted reason goes back to Prince Albert, Queen Victoria’s consort, who reportedly preferred the color as used prominently in the coat of arms of his family, the House of Saxe-Coburg and Gotha.

The curious second statement dates back to the 16th century and to Queen Elizabeth I. Queen Envoy Francis Throckmorton presented the Spanish ambassador, Bernardino de Mendoza, with a specially made red briefcase filled with black pudding. Since the action was seen as an official announcement from the Queen, the color red became the official state color from then on. The contents in the “archives” were created and posted by the previous owners of this website. We are not responsible for any misleading or incorrect content that is posted here. She is “stupid” and should “get your finger out of your ass”: Farmer Patrick uses psychological violence against his lady-in-waiting Antonia. All about the sixth… The contents in the “archives” were created and posted by the previous owners of this website. We are not responsible for any misleading or incorrect content that is posted here. “Such a fun time” Spice Girls re-release “Spiceworld”. 09/28/2022, 07:46 AM “Say hello to #Spiceworld25”: In 1997, 25 years ago, the Spice Girls celebrated success… The contents in the “archives” were created and posted by the previous owners of this website. We are not responsible for any misleading or incorrect content that is posted here. Irina Shayk posts holiday photos Is Bradley Cooper Working on Love’s Comeback? 9/3/2022, 9:48 PM Holiday with the ex: In the case of Hollywood star… The contents in the “archives” were created and posted by the previous owners of this website. We are not responsible for any misleading or incorrect content that is posted here. After 25 years together Has Stallone’s wife filed for divorce? 8/25/2022 1:42 am Since the Rocky actor replaced a tattoo of his wife’s face with… The contents in the “archives” were created and posted by the previous owners of this website. We are not responsible for any misleading or incorrect content that is posted here. Contents 1 (Anti-)war film reloaded “Nothing new in the West”? Are you kidding, are you serious when you say that! 2 Through German glasses 3… The contents in the “archives” were created and posted by the previous owners of this website. We are not responsible for any misleading or incorrect content that is posted here. Kraftklub, Seeed & Co Lollapalooza closes festival summer 9/23/2022, 1:48 PM It has long been a tradition that the Lollapalooza in Berlin marks the end…