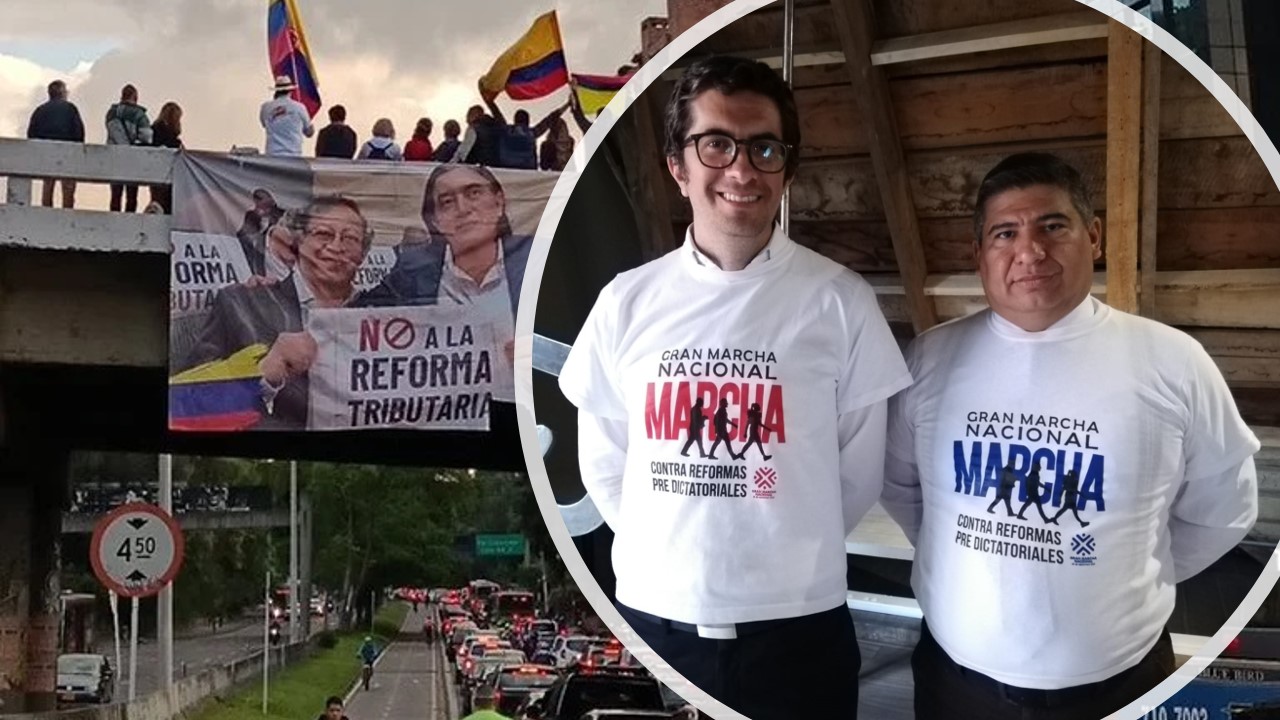 The organizers of the march against Petro’s reforms announced that they would not negotiate: these will be the main topics on September 26th. (In the photo: Pierre Onzaga and William Vergara, leaders of the Great National March)

The first protest march against the government of Gustavo Petro will take place this Monday, in protest against the tax, pension and electoral reform projects and the increase in the price of petrol from October. The organizer of the demonstrations, Pierre Ozaga Ramírezconfirmed that there are more than 40 cities in Colombia and abroad that will be marching.

The Bogota native referred to this protest for El Espectador: “In 2008 I led the march against the FARC and stayed behind with the civic fever to help social causes in Colombia and at this moment we are proposing a mobilization against the reforms of Gustavo Petro’s government“, he showed.

He owns an architecture firm as well as a food company, and from the United States, he assured that the September 26 march was non-partisan, he is looking for “draw a red line to withdraw reforms, we do not seek negotiations” and intended”give the citizens real representation before the parties that have joined the Historic Pact, thus becoming a real citizens’ opposition“, he added.

In dialogues for Blu Radio, the spokesman for the protest indicated that this will be a space for Colombians to raise awareness of the national government’s proposal Creation of a mega-organization called ONEfor the electoral order,it could split or dissolve any political party, be it the Green Party. the Democratic Pole, the Liberal Party or the Democratic Center. This has raised alarm and we believe that there is an authoritarian intention behind it to have as few parties as possible with a single philosophical and social orientation.“, confirmed for the medium.

So was the businessman Leader of the world mobilization against the FARC in 2008, as strategic communications consultant. Likewise, Pierre will be remembered as a campaign advisor to Juan Manuel Santos Calderón and as a candidate for the Senate of the Republic of Colombia in 2010.

Similarly, Pierre was nominated Character of the Year 2008 by media such as Semana Magazine and RCN Television. He is currently a columnist for Revista Semana

As for the protests this Monday, several sectors of business like conservatives, libertarians, religious and other citizens want to express their opposition to the reforms proposed by the national government.

“We are leading an initiative to take to the streets and stay if necessary, to be able to say to this government that we are against this policy, which harms the Colombian people. But we want to leave a note in this message, and that is that behind this great march is no politician, party leader, or past president, congressman, or candidate who was in the running.stated the spokesman of this mobilization Pierre Onzaga.

According to the organizer of the protest assured El Espectador that “NoWe ourselves have tried with our own resources to do things in such a way that each team organizes itself to provide the information services to each of the local administrations to get the use of the spaces. Each team makes their own jerseys and they do it with a lot of love for Colombia.”.

Finally, Pierre spoke about the outcome of the call, stating: “only god knows what the result will be in numbers, they stay on this line, we have a message, there are no negotiations on the reforms, they are being asked to be withdrawn, We want tax reform, labor reform, electoral reform, total peace and pension reform to be withdrawn, it attacks pensioners, it will leave them without money, it’s the same thing they did in Argentina, where they are Colombians achieve that when they worked what they want to do here“, he concluded.

According to Claudia López, the perceived insecurity in Bogotá is partly due to the sensationalism of the press
Venezuela and Colombia will reopen their border crossings this Monday after 7 years of closure Simone Tebet and Ciro Gomes The second round in Brazil brings with it an unpredictable scenario and with some polls falling short of their predictions, it’s difficult to know who will be the winner Jair Bolsonaro Y Lula Da Silva next October 30th in the South American country. For this reason, and because every vote…

Jim Redmond, who helped his injured son Derek cross the 400m finish line at the 1992 Barcelona Games and starred in one of the most iconic moments in Olympic history, has died at the age of 81, it was published on Tuesday. During the 400m semifinals, the British athlete tore his hamstring while skiing down… Saturday 1 October 2022 The Editor on Duty is Daniel Zadunaisky until 2100 GMT. Luis Ruiz takes over both in Mexico City from this hour on. FOOTBALL ITALY LEAGUE ROME — Cameroon’s Zambo Anguissa scores a brace for Napoli, who defeated Torino 3-1, extending their unbeaten streak and increasing their lead at the top of… César Vallejo and Alianza Lima face off on the 14th date of the Peru – Liga 1 Betsson 2022 tournament at the Estadio Mansiche, starting at 22:00 (Argentine time). After yesterday’s win, the visiting side will be looking to keep their supporters’ enthusiasm alive. The local hero has to go three to three after losing…