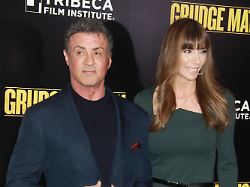 Has the action star wasted money?
Stallone Divorce Leads To War Of The Roses

Sylvester Stallone and Jennifer Flavin are getting divorced after 25 years of marriage. And the divorce does not seem to be as harmonious as initially announced by the Hollywood star. Flavin allegedly accuses Stallone of squandering the marital wealth.

Sylvester Stallone has responded to his wife Jennifer Flavin’s allegations. According to “People”, he rejects the accusation that the joint fortune was deliberately squandered. “The spouse has not engaged in conduct that involves deliberate waste, depletion and/or squandering of the marital property,” his lawyers wrote, according to the magazine.

According to “People”, Flavin’s allegations are reflected in the divorce papers. She filed for divorce on August 19, 2022 in Palm Beach County, Florida. Flavin and her attorneys reportedly argue that “the spouse should be prohibited from selling, transferring, assigning, encumbering or wasting property during these proceedings.” Flavin argues for “unequal distribution of matrimonial property in their favour”.

With regard to attorneys’ fees and court costs, Flavin asked the court to monitor the “conduct of each party,” which could extend the process to reduce attorneys’ fees. Regarding legal fees, Stallone’s attorneys say his wife “hired an attorney to represent her and agreed to pay the attorney’s fees,” the report said.

Sylvester Stallone and Jennifer Flavin were married on May 17, 1997 in London. At first, it seemed like the two wanted to avoid a War of the Roses. After the divorce, the two spoke about each other in public on the highest note. Laura Müller’s account balance makes Wendler happy, a politician dares to have a private life and the son of a music legend shows his new love. Vip Vip, Hooray!: These celebs were the talk of the week. Yes, dominion returns! What a great month it was when Michael Wendler made a financial profit with a… New series planned Ozzy Osbourne is back as a reality TV star 09/02/2022, 13:08 Ozzy Osbourne has already proven that he not only rocks, but can also entertain the public with his private life. Now the 73-year-old returns with a new reality TV show. His return from the US to England must be discussed. It’s… Farewell after twelve years GZSZ loses Maren Seefeld 09/05/2022 10:39 am The comings and goings of the characters are part of a long running TV show like “Gute Zeiten, Schlechte Zeiten”. It’s still hard for fans to say goodbye to long-running characters they’ve grown fond of. Like now from Maren Seefeld, whose actress Eva Mona… Another video has surfaced Melanie Müller probably also brought the Hitler salute 28/09/2022, 15:19 hrs After a first video appeared, in which Melanie Müller can be seen in the circle of some fans who give the Nazi salute and shout “Sieg Heil”, she distances herself from right-wing ideas. However, another clip now speaks a completely… No mercy for the twelfth time John Lennon’s killer remains in custody 13/09/2022, 6:55 PM It’s been more than 40 years since Mark David Chapman shot and killed former Beatles singer John Lennon in New York. He has been in prison ever since. The pleas of the now 67-year-old for pardon continue to fail. Same…