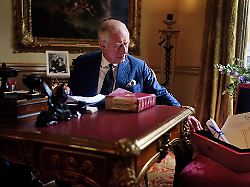 Her son Charles has been officially king since the death of Queen Elizabeth II, but he will have to wait a little longer for the crown. Although there is already speculation about the date of his coronation, the palace has now spoken out for the first time and made it clear: no date has yet been set.

The first rumors about the coronation of King Charles III have been circulating for several weeks. Among other things, “Bloomberg” recently reported, citing British officials, that the ceremony for the 73-year-old is set to take place on June 3, 2023. However, a source at Buckingham Palace has now denied the speculation and made it clear that there is no exact date yet.

“Without giving further details, I can assure you that no date has been set or approved and anyone who says otherwise is wrong,” a palace insider told the Daily Mail. “Operation Golden Orb,” as the schedule for Charles’ coronation is called, is in full swing and “a decision and announcement will be made in due course once a final result is available.”

With the death of Queen Elizabeth II on September 8 at Balmoral Castle, her firstborn, Prince Charles, became the new king after her 70-year reign. At the same time, “Operation Golden Orb” sprang into action. Charles officially took up his post as the new monarch on September 23. On that day, the palace released a photo of the monarch sitting at his desk. The contents in the “archives” were created and posted by the previous owners of this website. We are not responsible for any misleading or incorrect content that is posted here. “Priority are my daughters” Dwayne Johnson Buries Presidential Plans 10/10/2022, 10:15 am He wouldn’t be the first actor in the White House: In recent months,… The contents in the “archives” were created and posted by the previous owners of this website. We are not responsible for any misleading or incorrect content that is posted here. Rare interview Charlène talks about “hard times” 8/31/2022 5:32 PM Much has been said, chattered and written about Charlene of Monaco lately. She herself, on… The contents in the “archives” were created and posted by the previous owners of this website. We are not responsible for any misleading or incorrect content that is posted here. Entertainer with a card record Robbie Williams plays Elvis Presley 17/09/2022, 4:30 PM Robbie Williams has been in the business as a solo artist for… The contents in the “archives” were created and posted by the previous owners of this website. We are not responsible for any misleading or incorrect content that is posted here. “Monarchy for Troubled Times” King Charles III it won’t be easy 9/9/2022, 4:00 PM As the Queen’s son, the new British King Charles III. not… The contents in the “archives” were created and posted by the previous owners of this website. We are not responsible for any misleading or incorrect content that is posted here. “You don’t get out that much” Bushido’s wife shows the new residence in Dubai 08/29/2022 09:52 o’clock Bushido emigrated to Dubai with family and friends…