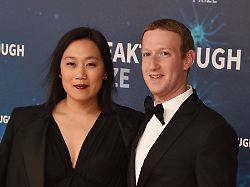 Satisfied customer at the Zuckerberg House. The billionaire becomes a father for the third time. The Facebook founder pays a lot to protect his small family.

Facebook founder Mark Zuckerberg and his wife Priscilla Chan are expecting another baby. On Instagram, the entrepreneur announced his partner’s pregnancy with an adorable photo of a couple, showing the two sitting side by side, dressed in casual sweaters, while he gently puts his hand on her stomach.

“Lots of love,” Zuckerberg wrote with the message. He is pleased to announce that their two daughters Maxima and August are “getting a new sister next year”. It is the third child of the two. Zuckerberg and Chan have been married since 2012. Daughter Maxima was born in 2015, her sister August was born two years later.

Zuckerberg pays a lot to protect his small family. He spends more money on it than any other tech boss in the world. As the Meta boss told the SEC, his costs exceeded $26.8 million in 2021 alone, the equivalent of nearly $25 million.

Zuckerberg’s security measures include precautions due to the coronavirus pandemic and private air transportation, which was paid $1.6 million last year alone. However, the “increasing hostility” towards Facebook and Meta is also said to be responsible for the rise in costs. Meta notes on the file that “negative feelings about our company are directly related to, and often transfer to, Mr. Zuckerberg.”

According to a Bloomberg report, other tech bosses spend only a fraction of this amount on security measures. Google CEO Sundar Pichai reportedly has just $4.3 million for his security, followed by Snapchat’s Evan Spiegel with $2.3 million and Larry Ellison, founder of the software group Oracle, with $2.2 million. Amazon boss Jeff Bezos spends just $1.6 million on his security. ‘Charlotte is good in goal’ Prince William looks around the stadium 10/07/2022 11:52 am The English are doing well – at least when it comes to football against Germany. In both the men’s and women’s European Championships, the “Three Lions” recently kicked the German teams out of the tournament. This is sure to delight Prince… Legendary appearance at Oscars Activist and actress Littlefeather passed away 10/03/2022 10:36 am Her performance at the 1973 Oscars will not be forgotten: Sacheen Littlefeather turned down the award on behalf of Marlon Brando, linking it to criticism of Hollywood’s treatment of Native Americans – a brave move that had consequences for her. Now the… He has been out of office for a week for the inappropriate behavior of King Charles III. discussed. Apparently, the 73-year-old’s nerves are always blank. But there are really plenty of understandable reasons for that. After 70 years as heir to the throne, the former Prince Charles has moved from the second royal rank to… Corona, streaming, other plans Woody Allen announces end of his directing career 09/18/2022, 7:57 PM Director Woody Allen hints that he will stop filming after his next film. In an interview, he gives several reasons, but also gives hope that his signature humor will reach the public in other ways. In an interview with the…