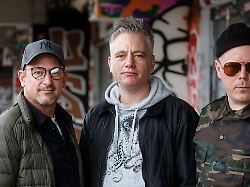 They broke through with “Nordic by Nature” and “Jein” – later they scored catchy hits again and again. But the German rap trio Fettes Brot wants to go their separate ways soon. And announces this – as usual – in rhymes.

A few days ago the band Fettes Brot gave a free surprise concert on the Elbe – now the three musicians Doctor Renz (Martin Vandreier), König Boris (Boris Lauterbach) and Björn Beton (Björn Warns) surprisingly announced their separation. “So before we can soon inaugurate our own wax figures at Madame T, we ‘almost 50’ perennial teenagers would rather dig our own grave,” the band said on their social media channels. “You read that right: Group Fettes Brot is not just old … but history! Dad and Dad and Dad are breaking up. At the end of ’23, we pack our gym bags and walk new paths from there,” it continues.

In addition, the band released hits like “Jein”, “Emanuela”, “Schwule Mädchen” or “An Days Like These” as well as “Brot weint nicht” with the right song and video: “Guys, we gotta tell you: FE -Double-T-ES BREAD is on the collar”, Dr. Renz raps and further: “But you won’t see tears, that can’t happen to us. Because bread doesn’t cry.” And the wish to see each other again in the spring of 2023 on a big farewell tour: “But of course: it is a matter of honor that our era must end together with a banging finale.”

The band also announced a “Greatest Hits” album. And a few surprises, such as the Hamburg harbor concert safari last Friday. The trio first rapped for the beach in Hamburg-Övelgönne on the roof of a harbor barge and supported by a DJ.

With “Jein” and “Nordic by Nature” the three boys from Halstenbek, Schenefeld and Pinneberg celebrated their breakthrough at the gates of the Hanseatic city. The three rappers divided the lines among themselves within the couplets. With the song “Emanuela” Fettes Brot took 2nd place in the Bundesvision Song Contest in 2005, later the single climbed to number 3 in the German single charts and even number 1 in Austria.

On the album “Am Wasser baut” (2005) there was not much rapping, the album was all in all more soul-heavy than its predecessors, with songs like “An Tage wiellen” the band also made political statements. The band released their latest studio album “Lovestory” in the spring of 2019. Doctor Renz, König Boris and Björn Beton highlight the different facets of love.

“As production progressed, we just realized that the strongest songs were all about love,” said Martin Vandreier. Musically, “Lovestory” ties in with the sound of previous albums – with a little less hip-hop and more funk and disco. A tour planned for 2020 and 2021 had to be postponed due to the corona pandemic. Tears, quarrels and infidelity Former babysitter of Wilde and Sudeikis unpacks 19-10-2022, 10:48 am After her “amicable” split from Jason Sudeikis, Olivia Wilde is dating her co-star Harry Styles in early 2021. The ex-couple’s former nanny now tells a completely different story. Accordingly, the actress cheated on her fiancé. It has been clear since the… Visit to the Brandenburg Gate Felipe and Letizia standing in the rain 10/18/2022, 4:27 PM At the arrival of the Spanish King Felipe VI. and his wife Letizia on Monday in Germany the weather is still perfect. But the second day of the visit literally falls through. Still, the couple is not deterred from a… Andrew insulted during procession The Queen’s coffin laid in the cathedral 09/12/2022, 7:44 PM During the procession along the Royal Mile in Edinburgh, Scotland, all of the Queen’s children stride behind her coffin through the waiting crowd. Only Prince Andrew is not allowed to wear a uniform. When a young man insults him from the…