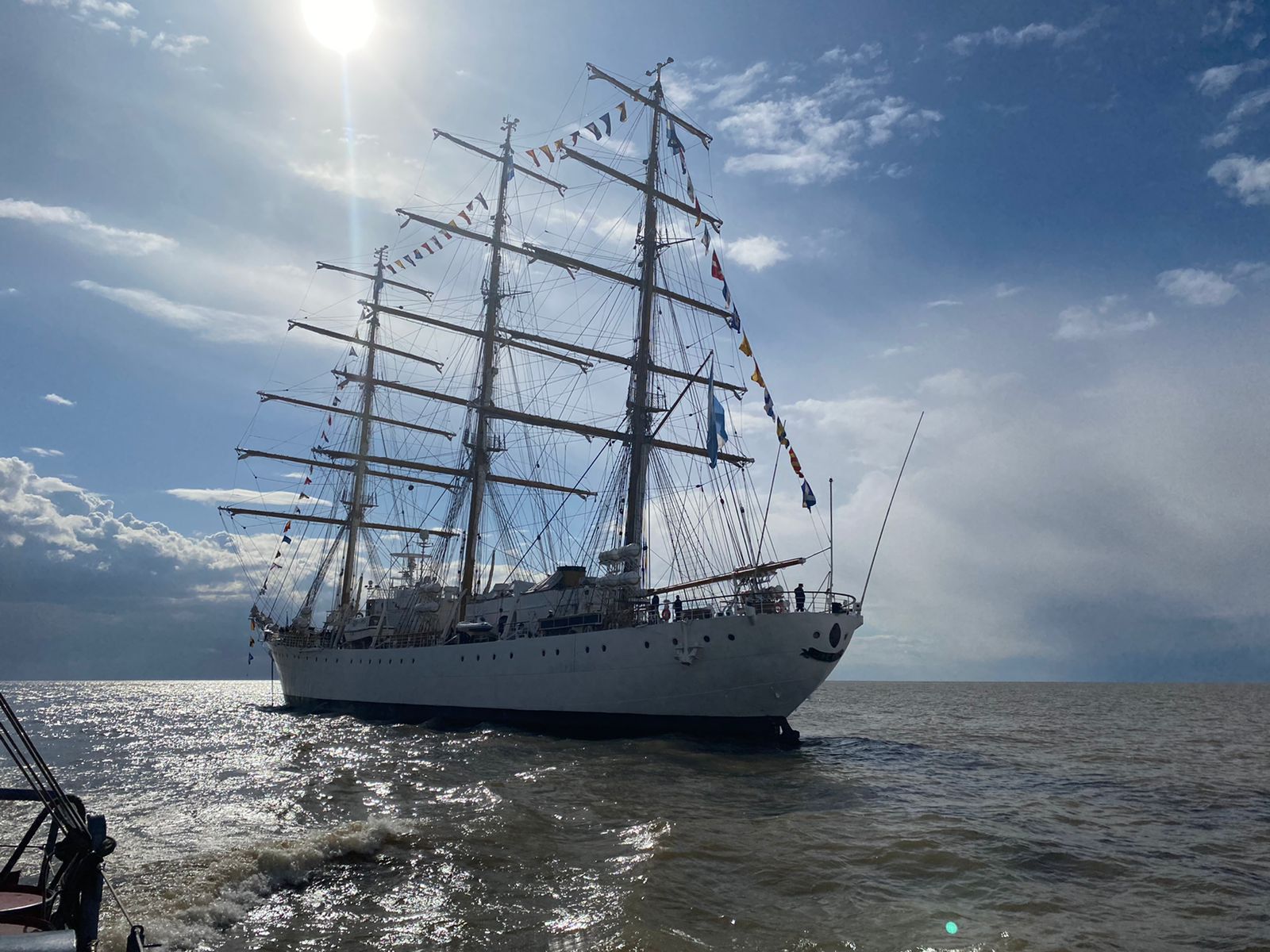 The frigate ARA “Libertad” cannot moor in the port of Buenos Aires due to a surprise stop by tugboats.

A surprise strike announced yesterday by the United Maritime Workers Union (SOMU) through a statement published on their social networks, prevented the frigate ARA “Libertad” from entering the port of Buenos Aires. The emblematic training ship of the armed forces was due to arrive at 9 a.m. today but had to anchor about 50 kilometers off Puerto Madero due to the violence.

Bundeswehr sources confirmed this Infobae that the arrival of the frigate Libertad will be delayed by union action decided by port unions to prevent trailers from entering the training ship.

“We are waiting for the development of unemployment to be able to determine when it will occur”they told this medium.

In a press release issued this morning, the Argentine Navy, which is dependent on the nation’s defense ministry, said the frigate Libertad “It is currently at anchor in Rada La Plata awaiting to complete its entry into port after completing its 50th training voyage.” 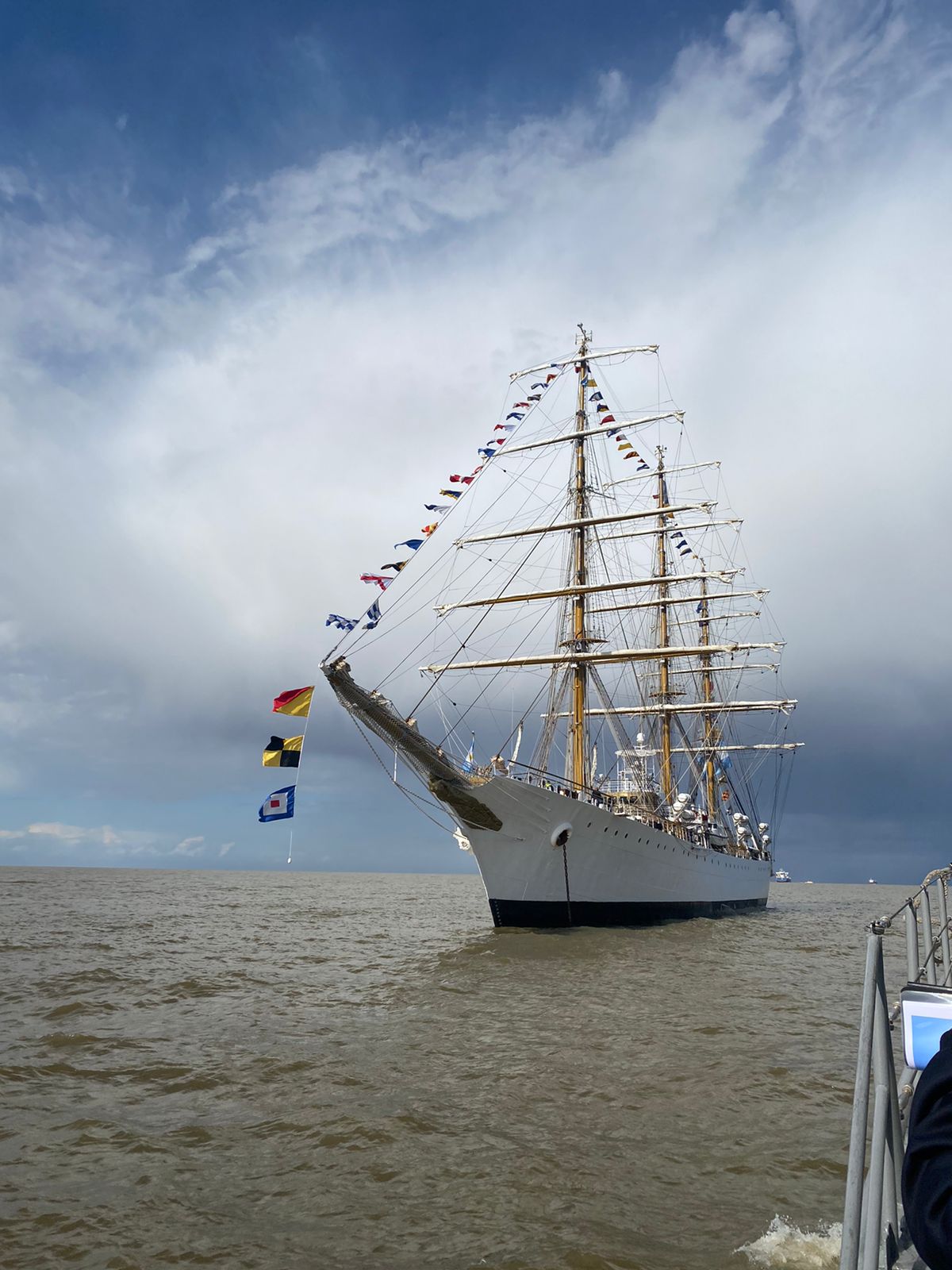 The Argentine Navy training ship has 326 crew members on board.

Karl Peter SchawinskyCommander of the frigate ARA “Libertad”, spoke this morning TN and said he was “optimistic” about the possibility that the SOMU leadership would allow an exception to return to the Buenos Aires port. “We are used to going through storms at sea and this would be one more. It strengthens us, especially for the training of sea cadets”emphasized the authority despite the adverse prospects.

Given the difficulties in making the mooring at the scheduled time, Commander Schavinsky estimated that the next high tide would be around 18:00 for what The school ship could arrive in Puerto Madero between 3 p.m. and 4 p.m. “Due to the characteristics of this ship, it is not possible to enter the port without the help of the tugs,” he assured.

In any case, the authorities of the Fragata Libertad are already considering alternative plans given the possibility that the cessation of activities will take longer than expected, and one of them is to go to one of the naval bases closest to the city of Buenos Aires. “We have our own Navy tugs there. We can access Puerto Belgrano – near the town of Bahía Blanca – our base, or any other defined port without having to take private tugs. Another option is Mar del Plata, but I hope I don’t get to that point. The families tried very hard to welcome us. Hopefully it will be resolved soonSchawinsky claims.

Finally, the ship’s captain confirmed that the “a process of water restriction” to buy time to stay in the Río de la Plata if this is so. 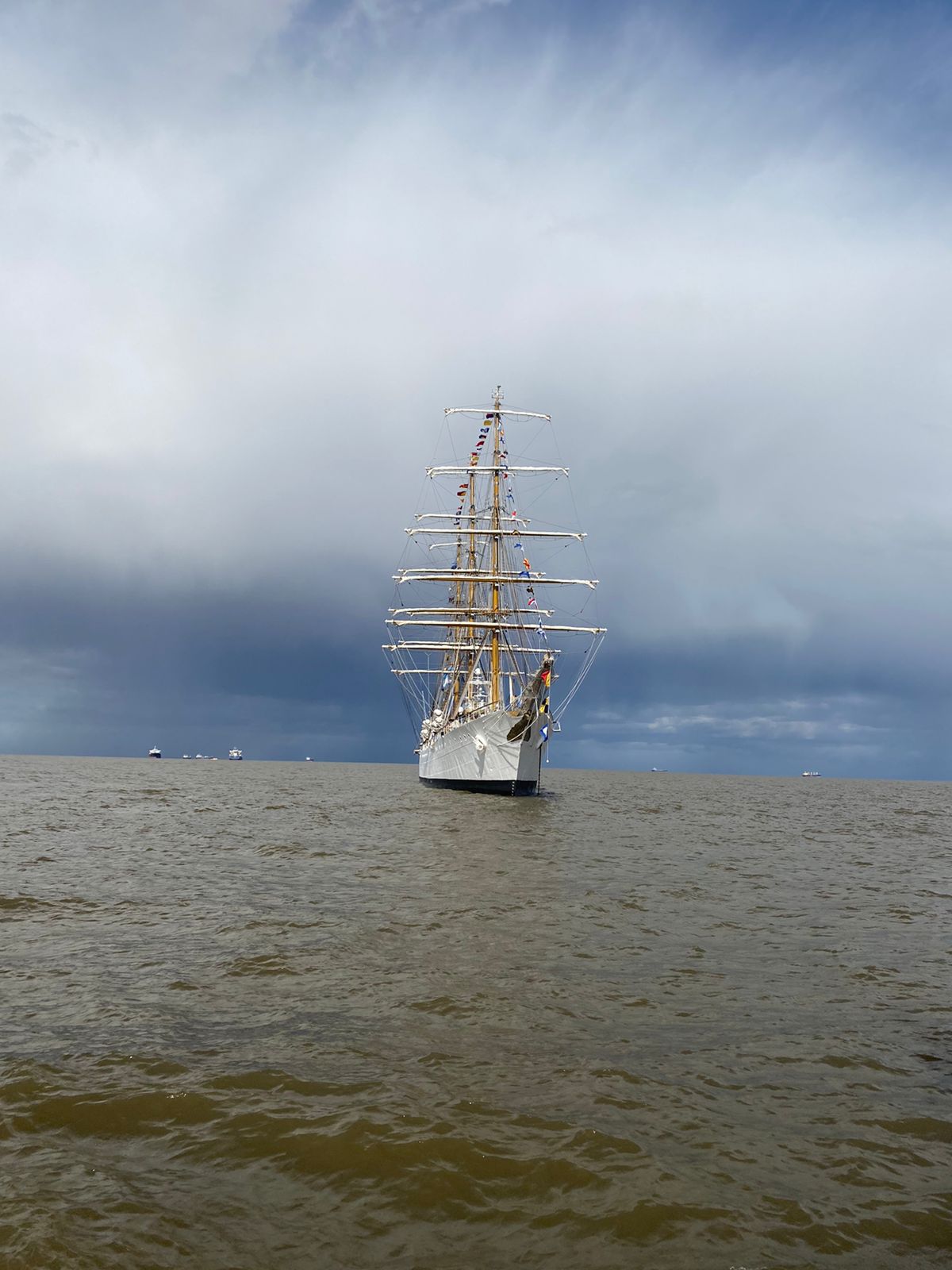 The ARA frigate “Libertad” remained at sea for four months.

This situation affects both the 326 crew of the ship, as well as her own relatives who had traveled from different parts of the country to receive her after spending five months at sea. However, it seems that the reunion will also be postponed.

After completing its 50th training voyage, the ARA frigate “Libertad” is due to arrive at the Buenos Aires naval station this Saturday, according to reports from the Argentine Navy. However, a few hours after the ship’s arrival, a level of violence promoted by SOMU became known, from which stalled wage negotiations that its leaders claim to improve the income of the smugglers who work in the ports. In the released statement, the union announced the coercive measure “after extensive negotiations and in the face of industry intransigence at the request of the unions Salary change in the area of ​​harbor tugs“.

For this reason, it was decided to decree “a total cessation of activities on the ships that make up the FENA and CNA as a whole, from 20:00 on the day of the date”, they explained this Friday. Also, they warned against it “This measure will remain in place pending official communication from the union sector.” 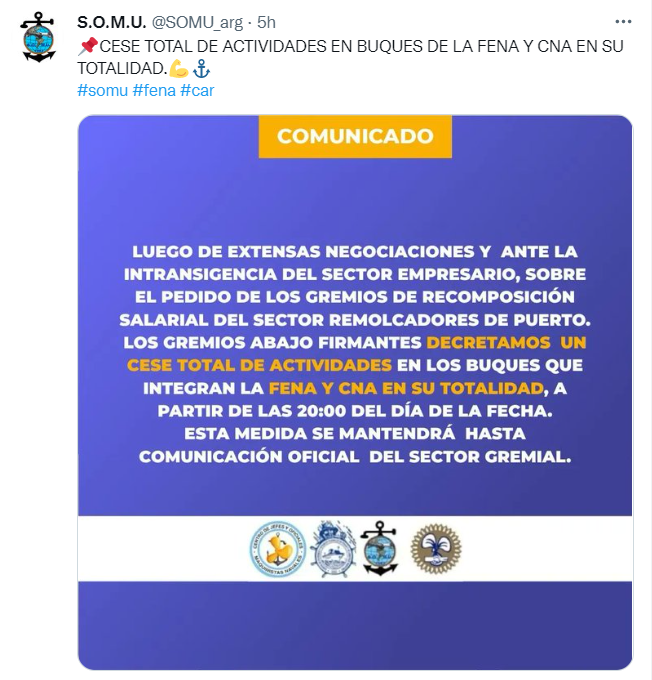 As he could tell InfobaeThe strike is being driven by four port associations, including at least two wanted to make an exception for the frigate Libertad so that he could moor as prescribed. But the request was denied and the level of violence remains.

After the announcement of the coercive measure, the union set out in a timetable how the port tugs, tankers and push tugs would have to postpone their normal activities if the strike for wage demands takes place.

According to the union the intervention of the Ministry of Labor should unblock the conflict. The possibility of reaching an agreement so that the frigate Libertad arrives in Puerto Madero as planned is still awaited and finally the reunion between the crew and their families takes place.

In a statement, the Argentine Navy reported that the ship will arrive after completing its professional training mission for commissioned midshipmen. In this way, the members were trained “to contribute to the increase of their nautical knowledge and their training in the culture of teamwork and in the development of leadership skills”. 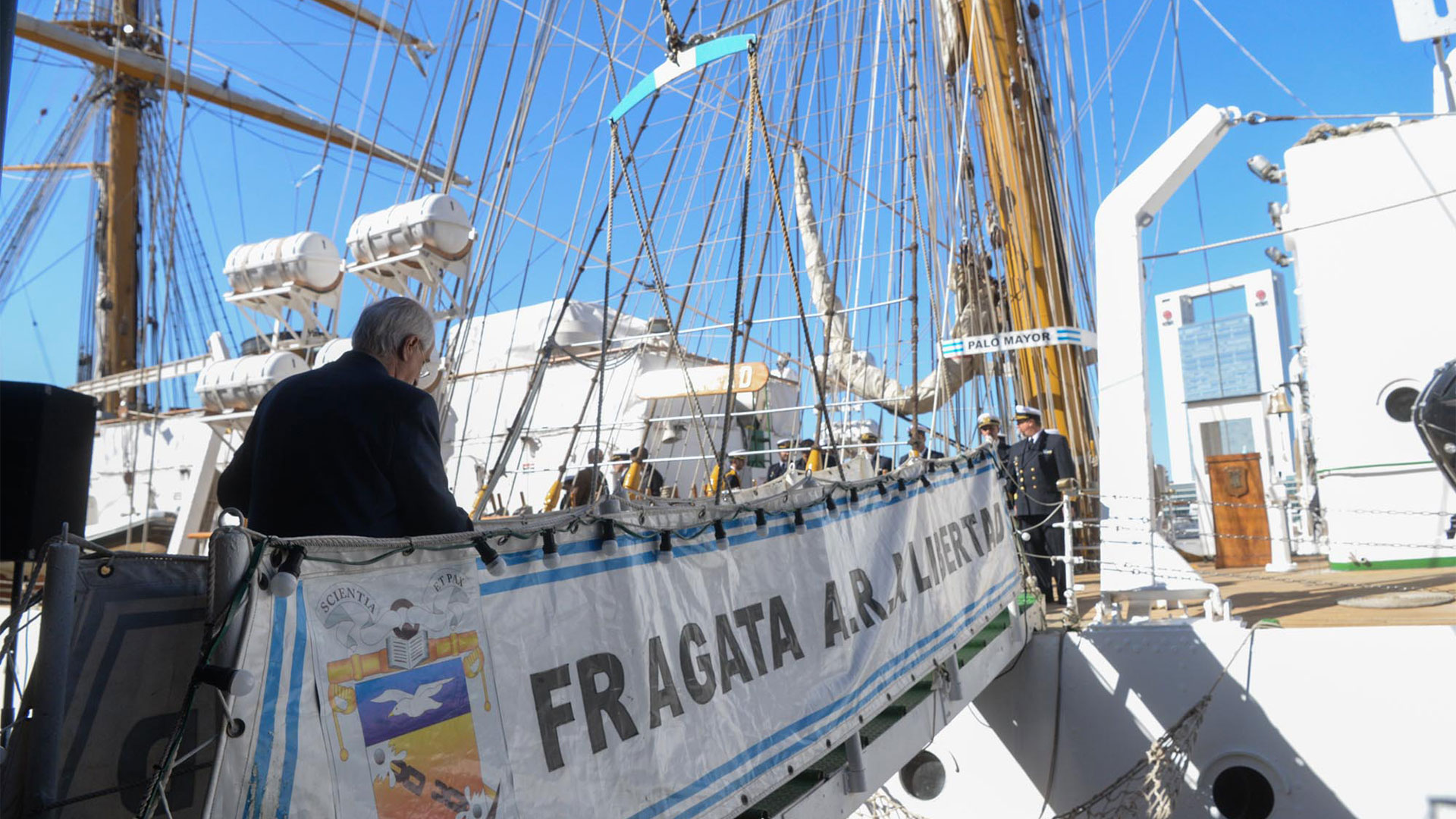 The Midshipman in Commission DaniellaPlaza declares to The Navy Journal – the Defense Forces portal controlled by the Department of Defense – that it has been “an incredible journey with great professional growth. We got on as cadets and got off almost like officers.”

“Everything we experienced during the voyage, both in port and on board during navigation, has allowed us to really experience what life at sea is like, how they behave in positions, what different tasks and duties a officer must take over”, Indian Telam.

In fact, he claimed that “there has been professional growth, you start to understand the reason for each thing, where we apply a rule, where we look for information when we need something specific, and most importantly, we integrate important leadership tools for leadership the staff.”

Ships, airplanes and hundreds of soldiers: that was the important mission of the Navy in one of the last exercises of the year
The Argentine Navy again has two ships that have been modernized
Fragata Libertad: a life at sea between storms and the love story behind her figurehead The contents in the “archives” were created and posted by the previous owners of this website. We are not responsible for any misleading or incorrect content that is posted here. house building Recently the Housing Minister Catalina Velasconoticed that the odds for “Mi casa Ya” (a subsidy the country regulates for Colombians to access the…

The contents in the “archives” were created and posted by the previous owners of this website. We are not responsible for any misleading or incorrect content that is posted here. SEE ALSO  Diamond Platnumz, Harmonize New Song Kwangwaru Banned in Kenya – DETAILS The contents in the “archives” were created and posted by the previous owners of this website. We are not responsible for any misleading or incorrect content that is posted here. (@SUUMA_CDMX) This Saturday morning there was a serious accident with 19 injuriessome seriously, as a pickup truck on Route 68 overturned and fell from the… The contents in the “archives” were created and posted by the previous owners of this website. We are not responsible for any misleading or incorrect content that is posted here. (Photos: Cuartoscuro) Américo Villareal, governor-elect of Tamaulipas, accused current President Francisco García Cabeza de Vaca of being behind the issuing of an arrest warrant against… The contents in the “archives” were created and posted by the previous owners of this website. We are not responsible for any misleading or incorrect content that is posted here. Colombian Ambassador to Venezuela Armando Benedetti poked fun at the Venezuelan opposition who would blame THE infamous case of corruption at the Monómeros company. Photo:…