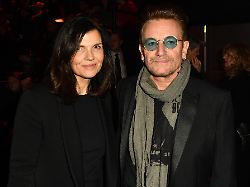 “A great madness”
Bono talks about his marriage

Some rock stars switch partners, while others switch towels. But not U2 frontman Bono. He’s had the same woman by his side in Ali Hewson for over 40 years. He has now revealed why this is so.

U2 frontman Bono has been in a relationship with his wife Alison “Ali” Hewson for over 40 years. He had met her at school when he was twelve. The two have four children together, all of whom are now adults.

In a rare interview with The New Yorker magazine, the musician opened up the secret of his decades-long love. “It’s a big madness with us,” says the 62-year-old. It has something to do with the knowledge that you are fighting together against all odds.

“But if you ask me seriously, I’d say sometimes friendship can trump romantic love. And friendship is what Ali and I have,” Bono said. If you have both, that’s something special.

“Let’s Not Mess With This Now”

At the same time, the singer emphasizes that this does not mean that every day can be described as wonderful. Even though it was difficult at times in the four decades, he and his wife always held on to their bond.

“Every time one of us got lost, the other was there to bring the other home and I’m very grateful for that,” Bono continues. In general, 40 is a special number for him, which he already realized on his 40th birthday. He and his wife then swore to each other, “Let’s not screw this up now.”

Paul Hewson, Bono’s real name, and his current wife, born Alison Stewart, were married in 1982. Their two daughters and two sons were born between 1989 and 2001. Ali Hewson made a name for himself in Ireland as an anti-nuclear activist. She also founded fashion and cosmetics companies that are committed to fair trade and sustainable production. The contents in the “archives” were created and posted by the previous owners of this website. We are not responsible for any misleading or incorrect content that is posted here. No private jets allowed Guests of state fly to the Queen’s funeral line 09/12/2022 01:42 AM At the funeral of Queen Elizabeth II in London… The contents in the “archives” were created and posted by the previous owners of this website. We are not responsible for any misleading or incorrect content that is posted here. “It sounds crazy” Paltrow compares university start of daughter with birth 9/27/2022, 12:26 PM Gwyneth Paltrow is just days away from celebrating her 50th birthday…. The contents in the “archives” were created and posted by the previous owners of this website. We are not responsible for any misleading or incorrect content that is posted here. A week before the start Trial against Gil Ofarim has been cracked for the time being 18-10-2022, 12:40 PM The Gil Ofarim case apparently always… The contents in the “archives” were created and posted by the previous owners of this website. We are not responsible for any misleading or incorrect content that is posted here. Found the right one Palina Rojinski talks about engagement 30/09/2022, 11:29 am Palina Rojinski slipped earlier this year that she is engaged. However, when the… The contents in the “archives” were created and posted by the previous owners of this website. We are not responsible for any misleading or incorrect content that is posted here. skin cancer on face Khloé Kardashian has tumor removed 10/12/2022, 2:17 PM It was just a small bump, Khloé Kardashian explains. But the skin changes… The contents in the “archives” were created and posted by the previous owners of this website. We are not responsible for any misleading or incorrect content that is posted here. Splashing with the son Emily Ratajkowski causes shit storm with nude photo 09/24/2022, 10:19 PM It would just be some cute snaps with her son…